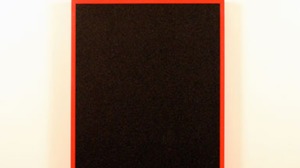 Tom Kotik began making sound pieces in 2004 while working on his graduate sculpture thesis at Hunter College.  A longtime musician and member of a rock band while at Hunter, Kotik had kept his musical endeavors separate from his artistic work until the inspiration came to him to combine the two threads of his creative life.

The intersection between sound and architecture, in Kotik’s view, lies in their shared ability to define the way we experience our space and surroundings.  The resulting body of work, which he refers to as “architectures of silence,” explores the power of sound by its absence, as well as the subtle effects of sounds, past or future, implied or imminent.

His new work explores the architectural qualities and monolithic presence of classic rock and roll amplifiers, with their dimensions altered, to allow them to be hung on the wall like works on canvas.  Though the amplifier- like forms produce no sound, they nevertheless retain their aura of rebellion and power, and evoke the blaring music that was their original purpose in life.

Tom Kotik was born in Prague in 1969.  He has a BS in Studio Art from New York University and studied at Hunter College, where he was the recipient of the Graf Travel Grant and received his MFA in 2004.  He has also attended the School of Applied Arts in Prague and Glasgow School of Art in Scotland.  His work has been widely exhibited in New York and abroad, including shows at Smack Mellon, Socrates Sculpture Park, and Sculpture Center in New York and Prague National Gallery in the Czech Republic.