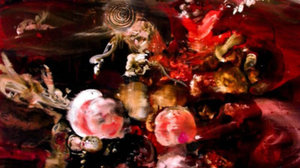 Lesley Heller is pleased to present a solo showing of the work of Catherine Howe, the first exhibition in the gallery’s brand-new space at 54 Orchard Street.

Howe’s recent paintings represent a new direction in her work, one that emerged as a result of her exploration of the sublime.  After working in the vanguard of new figuration in the mid-to-late nineties, using appropriated images of female faces and forms as well as appropriated painterly gestures, Howe is now working in an abstract vein.

This transition began with a series of paintings in response to the nymph “Klytie”, described vividly by Ovid in Metamorphoses,who pined away for love of the sun god Helios until she lost her human form and turned into a flower.  The metaphor of female desire as transformative and transcendent led Howe further from the images of women that had been her subject matter.  Instead, she began exploring pure gesture, sometimes mocking and sometimes embracing the painterly heroism of abstraction.

Her latest work continues that exploration in a series informed by the story of “Proserpina”, a maiden from Roman mythology, who was held prisoner in Hades, but Howe turns the myth on its head, imagining Proserpina’s winter in Hell as a respite rather than an exile.  Her images reveal glimpses of a rich variety of sources, from Dutch botanical paintings to Jackson Pollock.

Howe lives and works in New York and Columbia County. Her work has been exhibited extensively in New York and abroad for the past twenty years.  She has combined her painting career with lecturing, curatorship, and teaching, serving as Curator of Hallwalls, Associate Director at White Columns, and currently as faculty in the MFA program of the New York Academy of Art.  She received her MFA in painting from the State University of New York at Buffalo.