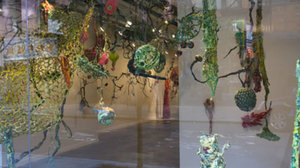 Chinese-American sculptor Ming Fay brings a naturalist’s eye for detail to his relentless inquiry into the meaning of organic forms.  A tireless cataloger of the shapes and symbols of the botanical world, he moves beyond mere observation and depiction to create installations that capture both the anxiety and the euphoria contained in the encounter between man and his environment.  Using a wide range of media and techniques, he works to decipher the coded messages that pass between humankind and nature, and back again.

Lush, fertile, brilliant with saturated color, surreal in size and proportion; his installations present a sort of three-dimensional cartoon version of our archetypal interfaces with the plant world: farm, garden, jungle.  His most recent work builds on the sum of his knowledge and past creations to explore forms both magical and mythical, richly evoking the possibilities of future mutations.

This exhibition will include the latest incarnation of Fay’s Jungle, an installation of trees, vines, fruits and other hanging oddities. Additional smaller pieces harvested from the artist’s Jungle and will be installed on the gallery walls.

Ming Fay was born in Shanghai, China.  He received a BFA from the Kansas City Art Institute in Missouri and an MFA at the University of California in Santa Barbara. Currently professor of sculpture at William Paterson University in New Jersey, he has received commissions for many public art projects, and his sculptures and installations have been shown all over the world.