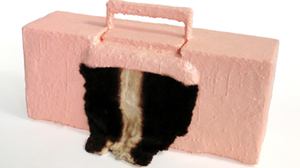 Lesley Heller Workspace is pleased to present  a solo exhibition by Brooklyn artist, Judith Page in Night Walk  featuring wall mounted, floor based and free hanging sculptures, and digitally debased and painted photographs. Page is known for her inventive use of materials and stimulating social commentary.

Using cast off objects, old books, photographs, and real and constructed memories, she selectively reveals aspects of her personal history as she exposes the underlying passion-filled dreams, persistent anxieties, and dark desires of humanity. An integral component of her art is the acrylic medium Tar Gel that has both sculptural and painting applications. Mixed with paint, it renders a full-bodied flexible high gloss surface perfect for creating “skins” that resemble lava or melting plastic. Page writes that, “Tar Gel creates a sense of flux, a gloriously seductive movement that spills onto paper, across canvas, envelops objects, and oozes onto the floor.”

The focus of this exhibition and the title were inspired by a line from F. Scott Fitzgerald’s book, The Crack Up, “... in a real dark night of the soul it is always three o’clock in the morning, day after day.” Page recreates these daily moments of crisis in her ongoing three-dimensional diary, 365 Dumb Days. The title for each sculpture begins with a date and follows with a reference to the form and content of the sculpture. For example, June 26 (Boom Box and Beaver), describes the components of the sculpture while also alluding to the beastliness and sweetness of adolescent sexuality. Other sculptures—with components that include an obsolete television, a Brazilian bola, a rusty knife, stuffed toys, a pony skin, chopped up yearbook photos and a crystal penis—tackle subjects that include loss of innocence, viral contagion, the transcendence of death through regeneration, the abuse of power and the plight of the power-less, the struggle between physical necessity and spiritual values, and the fluidity of history, as well as references to contemporary events such as the collapse of the World Trade Center.

Page will also show a new group of painted and digitally debased photos collectively titled, Dreams of Power. Based on an earlier series, Strangers in a Foreign Land, that placed forgotten 19th century political figures in a dark and formless night, Page’s current series tackles contemporary political figures who shrink and fade before the eyes of the public as they do in Page’s digitally altered black and white photographs. The ambition and presence of these politicians will be blotted out by time and memory—similar to the ambiguous puddles of pink Tar Gel that blot out sections of the photograph. Dreamers, however, as Fitzgerald suggests in the Crack Up, retreat into their dreams hoping that “things will adjust themselves by some great material or spiritual bonanza.” Page’s politicians are caught between the aforementioned hope of resurrection and the eventual disintegration of personality, their liquid ambitions passed on to succeeding generations.

Judith Page was born in Lexington, Kentucky, and studied art at the University of Kentucky and Transylvania University. Early influences were her father, an amateur historian, photographer, and raconteur, who instilled in her a love and respect for history and the creative process; her optometrist, the photographer Ralph Eugene Meatyard, who influenced her through his commitment to a Gothic vision; and writers such as Flannery O’Connor, Ed McClanahan, and Carson McCullers who provided her with many potent visual images. Other influences include the Roman historian Tacitus; the politician Cassius Clay; the musician John Jacob Niles; and Southern vernacular artists such as Bill Traylor and Howard Finster. Page says that her “art emerges from a Gothic sensibility, a place where horror and beauty exist in close proximity, where innocence encounters depravity, where the spirit is consumed and revived from moment to moment.”

Page lived and worked in Florida until relocating to New York City in 1992, and currently lives in the Williamsburg section of Brooklyn. She received Individual Artist’s Fellowships from the Gottlieb Foundation in 2002; the Pollock-Krasner Foundation in 2005-06 and 1998-99; and from the State of Florida in 1992-93. Exhibitions include The Photograph as Canvas, The Aldrich Contemporary Art Museum, Ridgefield, CT; Disarming Beauty: The Venus de Milo in 20th Century Art, Dali Museum, St. Petersburg, FL and solo exhibitions at Luise Ross Gallery, New York, NY; Wake Forest University, Winston-Salem, NC; Massry Center for the Arts, The College of Saint Rose, Albany, NY; and at Lesley Heller Gallery, New York, NY. Page’s numer- ous exhibitions and installation projects were written about in Art Papers, The Brooklyn Rail, The New York Times, Art on Paper, and Art in America. In September 2008, a sixteen-page artist project was published in the literary/art journal, Post Road.