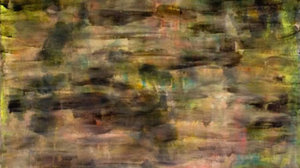 Claire Seidl paints in oil on wood or linen, experimenting with various surfaces, finishes, color palettes, and textures.  Her compositions celebrate gesture and balance but         rigorously eschew any flirtation with figuration; indeed, Seidl underscores the works’ visual abstraction with titles that hint at the intangible realm of ideas, such as Bygones Will Be Bygones andBe On My Side, I’ll Be On Your Side.

Such discipline frees Seidl to focus the viewer’s attention as purely as possible on the act of seeing.  Her surfaces and finishes elucidate the behavior of light, and her use of color works toward the same end, with each composition playing out a limited color palette that enables contrast and concordance to be examined with an almost empirical precision.

By limiting the elements that make up a painted composition to their basic components, Seidl’s work investigates the act of perception itself, focusing the eye on its own actions as it sees, separating visual impact from related processes like interpretation and memory -- a distinction as microscopically precise as the splitting of an atom.  As the point of focus moves, like a cursor, across the field of vision and determines what we take away from a given scene, Seidl’s brush marks the canvas in a precise record of an imprecise act.

Claire Seidlis the recipient of many awards and honors, including a grant from the New York Foundation for the Arts and a residency at the Edna St. Vincent Millay Colony in Austerlitz, NY.  She has taught painting at Hofstra University and Hunter College.  Seidl received her BFA from the College of Visual and Performing Arts, Syracuse University and her MFA from Hunter College of the City University of New York.  She has also studied at the International Center of Photography in New York and Sir John Cass College of Art at London Polytechnic University.