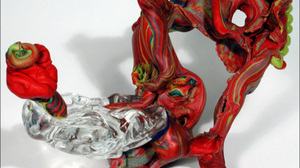 Daniel Wiener’s latest project title, Making is Thinking, comes from the introduction to The Craftsman, a book by sociologist Richard Sennett, whose primary interest is material culture-- the study of what the work we produce reveals about ourselves. The concept of material culture is illuminating in regard to Wiener’s recent work, which constitutes a radical re-imagining of the relationship between art and audience in the post-conceptual era. “During my lifetime,” says Wiener, “artworks have increasingly been reduced to their ‘idea,’ presented as either an analytic construct or simply as the branded ideation of an ‘artiste’.” By contrast, Wiener, a self-described “tinkerer,” whose artistic process privileges imagination and allows for the influence of randomness and experimentation, reacts against the reductive aspects of the Conceptual movement in art.

Wiener received his degree from the University of California at Berkeley, and has taught sculpture at various universities, including New York University, Bennington College, and Parsons School of Design. He has been a recipient of a Yaddo residency, and his work has been exhibited all over the United States and around the world.