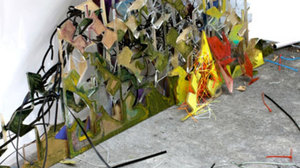 Gallery 2:New Monuments, curator and sculptor Ben Godward has assembled a group of artists who upend traditional notions of landscape and sculpture, working toward a new set of rules that incorporates the use of industrial discards, construction materials, recyclables and other relics of castoff culture, as well as more traditional media used in non-traditional ways.  As the exhibition title suggests, the works shown here are both new and monumental, with an attitude toward the cherished institutions of past practice that is irreverent, but stops short of disrespect or outright dismissal.

Godward describes his own works as “reflections of myself, contradictory and impulsive.”  He commands a jarringly bright palette of sometimes painfully contrasting colors that evoke cartoonish excesses of emotion and exuberance, with an undertone of unease -- toxic orange, crime-scene-tape yellow, biohazard red.  His unregulated forms underscore this sense of instability, both joyful and dangerous; they are the forms of friendly comic-book caricatures, but also call to mind the swelling randomness of mutation, decay, and disease.

Like Godward, Jesse Bercowetz creates sculptures that contain strong elements of chaos and    discord.  Often working at room-scale, he assembles debris, thrift-store finds and street trash to create sculptures that capture the unease and paranoia of modern life.  In a similar vein, Liz Atzberger uses the brightly colored detritus of modern life to explore notions of pattern, scale, and repetition inspired by natural phenomena such as electromagnetism and emergent growth patterns.

Audrey Hasen Russellrescues a classicist fondness for materials and applies it to found objects and construction materials, drawing inspiration from the physical properties of the media she sculpts and assembles.  Letha Wilson’s art represents a new take on landscape photography, bringing it into three dimensions to allow sculptural and architectural vocabulary to attempt -- and fail -- to make up the shortfall between the photograph and the natural world that photography always, at some level, fails to encapsulate.  Wilson’s works point out this failure, but stops just short of declaring the endeavor to capture the inspiration of the natural world fruitless in itself.