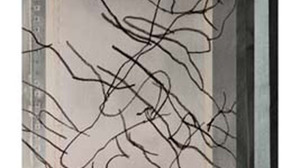 Grace Knowlton’s sculptures explore strong, affirmative and essentially present forms, endowing them with weight, mass,and a definite, affirmative presence.  Seen at close range, however, the artist’s attention to details of material and texture endow them with a mitigating delicacy and subtlety.  Knowlton executes her pieces with a grace and balance of form that evokes an ideal partnership between positive and negative space, a stasis that is alive, active, poised.