Don't Fence Me In or Out curated by Lisa Corinne Davis 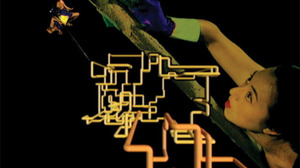 In “DON’T FENCE ME IN ... OR OUT,” painter/curator Lisa Corinne Davis examines the sometimes contentious relationship between art and feminism, presenting the work of eight young female artists whose uneasiness with limitations contribute to their complex reading of feminist themes in their work.  Diverse in method, practice, area of investigation and country of origin, these women have in common the desire for control over the degree to which gender, sex, and feminist thought are central to their artistic practice.

With technology, social media, and information overload as her major themes, Katherine Behar flies in the face of conventional notions of what constitutes “women’s work” and shows how, for better or worse, the sphere of female influence spreads far beyond the borders of home and hearth that once curtailed it.   Behar seeks to document the disorienting effects of immersion in modern multi-media, information-heavy society.   Yet, describing a desire to “meet my silicon cousins halfway,” Behar questions the notion that computers and machines erode our humanity, instead positing a sometimes troubling vision of the ways in which humanity must evolve to keep pace with its creations.

Rachel Budde’sdrawings and paintings employ a complex system of personal iconography devoted to exploring what the artist calls “a primordial female archetype,” whose attributes are drawn from popular culture as well as ancient symbols of the feminine as diverse as the Venus of  Willendorf and Hindu Tantric art.  Budde’s work contains an understated theme of ancient power, and her female archetype, though far removed from Betty Friedan’s vacant housewife, has all the earmarks of an evolving consciousness on the brink of taking control.

Dawn Frasch’s art employs a classic strength of paint:  the ability to capture flesh in all its grotesquerie and beauty.  Feminism in Frasch’s work finds its expression with concepts of gender and culture that are fluid and flexible:  “I'm interested in women who use trash culture to talk about feminism and sexuality and who use changing social, political and economic conditions to adapt stories without a dry or heavy-handed approach,” Frasch says.

Jaeeun Lee takes up the theme of disenfranchisement in general, not only through a feminist lens.  In fact, Lee demonstrates the value of a shifting perspective, viewing society as a labyrinth in which we all become monsters, seeking every possible advantage over our fellow monsters.  Only by reawakening the deteriorating skill sets of empathy and compassion, her work implies, can mankind redeem itself.

Hearth and home are venerable motifs in feminist art, but Satomi Shirai is concerned with the unstable meanings of these concepts from an immigrant perspective.  Informed by traditional Japanese culture, where hyper-femininity is used as a shield to protect women, and New York’s cultural melting-pot, where assumptions about such boundaries encounter daily challenges and clashes, Shirai creates an inspired exploration of home as a place that is comforting despite being imperfect and unstable.

In her quest to explore and expose the hidden structures of power and their marks on our world, Sarah Young seeks “to use the body as bridge between ancient religious text and the lived world.”  She sought the help of collaborators who were themselves struggling with religious tradition or practice in some way. “Here the woman’s personal history becomes much more instrumental then any ‘feminist critique’ of Biblical or Talmudic thought,” Young says.  “While I am still very much interested in traditional discourse, I aim to create a practice that is embodied first and foremost and rooted in my lived world instead of in theory.”

Merging memory and meaning, Suko Presseau’s ritualistic work is an incantation of both beauty and violence, often to the point of absurdity.  Encouraged by changing seasons, astronomical markers of time, and natural or man-made environs, Presseau investigates art, agriculture, trade, and spirituality through an epic and cinematic eye. Her images are somewhat iconic and believable, but we are left wondering what is real, for she blurs fact and fiction.

The inevitable associations of “women’s work” as a feminist iconography inform Amanda Valdez’s practice without defining or limiting it.   Creating fabric paintings that include elements of stitching and embroidery, Valdez explores the interplay of color and composition in the bas-relief that inevitably results from the materials.   A heightened tension between elements adds a layer of complexity to the works:  “Simple shapes gain an unexpected flirtation with one another or they feel the pressure of the seams holding them together,” says Valdez.  “The places or sites where the shapes and pieces of material collide become lines of struggle, till they freeze into a place of leaning, bending, or nudging into one another and become alive in subtlety.” Appreciating her materials for their rich associations and their venerable role in human culture, she grants them new power and authority.