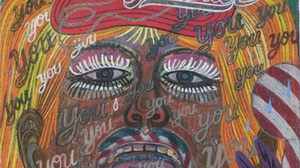 In Head Case, painter and guest curator Laurel Farrin treats portraiture as a point of departure, bringing together a group of artists who depict not just faces and heads but what goes on inside them.  Playing on the exhibition title’s double meaning -- head case is both slang for a crazy person and a scientific term to describe the part of a chrysalis that covers a developing insect’s head -- she brings together a group of works that explore both madness and transformation.

These artists, Farrin says, “loosen the screws, unhinging head forms as containers for mischief, play and pathos. These heads make up the faces of obsession and wild restraint, nonconformist expression and myriad disorders.

Through humor, madness and catharsis, we are presented with the portraits of  our insides, out.”

James Siena’sFirst Old Man and Blind Nose Man examine our horror of decay and death, as well as human fears of aging and entropic forces.  Katarina Wong, in Army of Me and The Beast Within, explores related themes, giving faces of horror and chaos to what may have once been cartoon animals, drawn in the usually refined medium of sumi ink.

John Haskell’svideo, I am Not Jackson Pollock is a Cedar Bar monologue of fear, conflict and rage. David Storey’s cartoonish and colorful figures have a joyful unity that makes their ambiguous hints at humanness less ominous than they might otherwise be.  Julia Schwadron’s Self Help series offers self-help titles for our perusal in a subtle critique of the all-surface quality that dogs the American quest for self-actualization, while Jonathan Seliger’s Freud Bag gently spoofs an even shallower and more misdirected search:  happiness as consumer commodity.

Alex O’Neal’sDelta CityYou gives us not one or two faces but a whole crowd of them, manifesting a typically American, yet strangely endearing grandiosity in their mundane swagger and style.  Trevor Winkfield’s Portrait and

John Dilg’sHEADRESS present a quieter style of adornment, with Dilg’s figure combining ceremonial adornments of the natural world in a formal portrait-landscape, and Winkfield’s taking nature’s glory for protective coloring. These carefully-outfitted figures reveal as much as they protect.Laurel Farrin’s Looking At Painting gives us the portrait of a painter and a painting, skewed into the video world they have become.Jane Kent’s dark and minimalist Double Take hints at a monotone bivalence that is equal and opposite, and finally, Ray Johnson’sNot Mad Babab, a rarely seen ink drawing, is a postcard apology for madness, an epitome of wackiness.