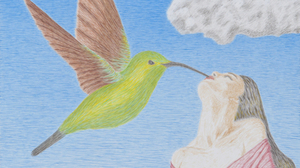 In Nick Ghiz’s solo exhibition entitled, Fiction Paintings, he uses a #1 brush on wood panel to create pictures of mystery and absurdity. There is no definitive plot in these narrative works. We are left to our own interpretation in the unusual world of Ghiz’s imagination. Figures are contorted into yoga positions, some are dancing, and their attire and hairdos suggest a timeless grace and eloquence. Ladies wear gloves and feather hats and men in suits resemble Fred Astaire. Animals are personified and seem as though they can speak, and the viewer is mystified by the expressions of his human characters.

Ghiz’s former involvement in the theater is evident. Elements of his paintings act as props as the drama unfolds before us. His compositions are influenced by his daily devouring of literature, 14-16th century Northern Renaissance portrait and landscape painting,   vintage and contemporary magazines, and personal photographs.

Formerly a sculptor, Ghiz replaced his chisel with tiny brushes, and upon close examination, themyriad of strokes contain a similar energy and rhythm similar to Van Gogh - without the impasto. Done on small wooden panels, they are reminiscent of old master paintings, and Ghiz brings us into this century with his bright, colorful palette.

Ghiz tricks us with his quirky picture plane and sense of scale - the ceiling becomes sky, and a figure is dwarfed by the claw of a raven. His clever use of perspective perplexes the viewer’s sense of scale and dimensionality.  A simple rendering of an arch brings the viewer in to another space, and yet another after that, and just before, a hippopotamus squats, smiling as does the viewer.

Nick Ghiz was recently commissioned by Johns Hopkins Hospital to create a series of panels for their children’s wing. He will be featured at Chicago’s Next Art Fair this coming spring. He has had solo exhibitions at the Sculpture Center, NYC and at the Special Projects Room at P.S. 1, L.I.C., NY. Ghiz is a McCall Foundation grant recipient.