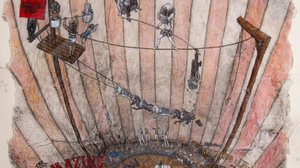 Gallery 1:Jade Townsend’s new body of work,Leviathan, assembles an absurd and fragmented narrative. As told by an amalgam of outcasts – the rebel, the orphan, the mystic – a coalescing set of stories manifests as a sculptural passageway through which to pass and return. Similar to his past mixed media sculptures and installations that critique and intensify tragic sociopolitical realities, Leviathan layers multiple myths and allegories, along with their archetypal characters, to pursue the conflicting destinations of contentment and rebellion. Whether or not such a goal is achievable is of little concern. Rather, as Townsend has continued exorcise in his work, it is the failure to see what is given up as we seek what we wish to gain.

“Now, from this peculiar sideway position of the whale's eyes, it is plain that he can never see an object which is exactly ahead, no more than he can one exactly astern.” Moby Dick

In Townsend’s account, the inevitable blind spot of futile pursuits is reified in the gallery as an abandoned commercial box truck. Entered through the rear of its empty corpus and delivered to the decapitated head, the everyday Leviathan is simultaneously the whale and the ship that sought its demise. As it lies in state, the delivery truck serves as a prop of triumph and defeat. Surrounded by drawn imagery of misguided rebels, reckless strivers and their delusional conquests and superstitions, the gutted beast foretells their fate. Unable to see what is in front of them, the vision-impaired Ahab, Sisyphus, and the tarot reader mingle together, each interrupting the others’ tales of implacable affliction and curse.

Jade Townsend lives and works in Brooklyn, NY.  Recent shows include 'New Image Sculpture' at the McNay Museum in San Antonio, TX and 'Drawn to You' at Gallery Poulsen in Copenhagen, DK.   He is currently working on a collaborative exhibition with William Powhida in Denmark.