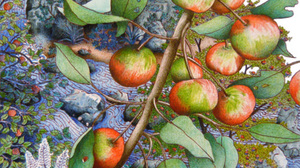 The real Wild Apple Forest, located in a remote mountainous region in Kazakhstan, is the genetic origin of all the apples on our planet, as well as over 300 other wild fruit and nut species. The ancient Silk Road passed through this area and millennia ago nomads and traders took the wild apples with them on their journeys west. This exhibition brings together Eade's two-year journey exploring the subject of the Wild Apple Forest. Applying his distinct sense of color, space and detail, he highlights its wonderfully weighted scientific, cross-cultural and metaphorical significance.

The current destruction of these forests to near extinction inspired Eade to eulogize this botanical Eden by transforming an apple tree into The Tree of Life.  Appearing in The Wild Apple Forest, 2012 and in Full Moon, 2012 Eade’s anthropomorphic Tree of Life richly bears gilded apples. In another response, he composed Vanitas, Wild Apple and Pear Branches, 2011. Consistent in his practice of referencing art historical traditions, Eade reinterpreted this form originating in the 17th century Dutch tradition conveying the moral message all good and beautiful things can come to an end.

Eade’s work draws on his daily life, personal travels and the web as well as the cultural and visual art histories of both the East and the West. The influences of Christian religious paintings, Asian landscape art, and Persian miniatures are strongly evident. Working intuitively, Eade transforms these sources into new worlds. His paintings invite viewers to embark on a visual tour of an unknown yet familiar landscape, becoming a part of their cultural and emotional consciousness.

Egg Tempera, considered one of the most archival and stable mediums, is an ancient painting technique that utilizes egg yolk, dry ground pigments and water, which when mixed are then applied to a gesso prepared wood panel or canvas.

Michael Eade was born in Portland, Oregon. Receiving a BA from Oregon State University he continued studies at the Staatlichen Akademie der Bildenen Kunst, Stuttgart (studying egg tempera painting techniques) and New York University’s Tisch School of the Arts. While attending NYU, he was an assistant to the American sculptor Louise Nevelson. He has received many honors including a current residency at the Hermitage Artists’ Retreat, a studio membership at the Elizabeth Foundation for the Arts, and fellowships from the Robert Blackburn Printmaking Workshop, the National Academy Museum and School of the Fine Arts, Artists’ Fellowship Inc., and Aljira. This year, he was selected as a finalist for the prestigious Basil H. Alkazzi award for excellence in painting. He lives and works in New York City.