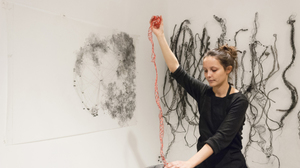 Gallery 1: Nene Humphrey’s Circling the Center began as a private meditation on loss and grew into art making with surprising connections between the neuroscience of emotions and Victorian Mourning Braiding. As a result of working as an artist in residence at the Joseph Le Doux Lab at New York University since 2005, focusing on the amygdala (the part of the brain where emotions reside) her drawings, sculpture and video work reflect new ways of seeing the brain. Humphrey uncovers imagery invisible to all but a handful of scientists who are searching to find patterns among seemingly random collections of neurological communication. Her drawings done on mylar reflect schematic brain diagrams layered with neurological data from the Le Doux lab and 19thcentury Victorian braiding.

Humphrey’s interest in the lab’s research led to further investigations of pattern making in its many visual and cultural forms where she encountered the craft of Victorian Mourning Braiding, a ritualistic practice of creating intricately woven objects in remembrance of loved ones. The lost art involves braiding patterns into bracelets, earrings, and necklaces using a braiding table. Braiding Round, a large suspended spherical structure featured in the exhibition, is composed of Victorian Mourning Braids made with thousands of yards of copper and steel wire. Combining ritual with science and art, Humphrey’s work is an allegory of the human experience.

Humphrey has received awards from the National Endowment for the Arts, The Rockefeller Foundation, Brown Foundation, The Smithsonian Institute Artist Research Fellowship, the Asian Cultural Council Artist Grant, and Anonymous Was A Woman among others. Her work has been written about in numerous publications including the New York Times, Art in America, Art News, The Village Voice, and Sculpture Magazine.