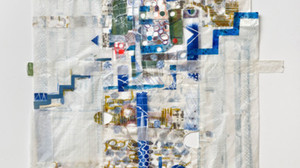 Each drawing by Siegel unfolds as a dense tapestry piled with architectural gateways such as fences, walls, doorways, stairs, ladders and freeways. Segments of information are recombined and woven together. In Plans and Interruptions, cubist fracturing takes on new meaning in a world of globalism and composited information. With processes such as cutting and layering, Siegel employs her trademark of removing and concealing the unessential.

Included are three floor to ceiling monumental collages: Tre - a study of the outward growth of Siena’s walls, Navigation - a vertical history of the port of Genoa, and Overland 16 - a constructed aerial view of Los Angeles. The irregular compositions are drawn from each location’s characteristics. A major influence for Siegel has been Italo Calvino’s “Invisible Cities,” where detailed layouts of invented places are contrasted with one another.

While Siegel’s practice is based in Los Angeles,recent fellowships at the Bogliasco Foundation, Siena Art Institute, CCA Andratx, and work with US Art and Embassies have contributed to in-depth research internationally.

Concurrently, Siegel has a solo drawing project at the Art, Design and Architecture Museum at UC Santa Barbara where she has developed a suite of 50 drawings that study environmental and population changes within this “utopic” coastline of  California.

Siegel’s drawings have recently been acquired by the Museum of Contemporary Art, Los Angeles, and the Yale University Art Gallery. She represented the United States in the IX International Biennial of Cuenca, Ecuador. Other exhibits include the Center for Contemporary Art in Tel Aviv, Muzeum Stzuki in Lodz, Poland, and Nuova Icona in Venice, Italy. In the US Siegel has recently exhibited with ACME, LA Louver, and Roberts and Tilton in Los Angeles, and in NY her work was included in “Slash” at the Museum of Art and Design and “Extravagant Drawing” at Dorsky Curatorial Projects.

Fran Siegel has received a Getty grant from the California Community Foundation, the OC Contemporary Collectors Award, and the City of Los Angeles Department of Cultural Affairs (C.O.L.A.) Grant. She earned her M.F.A. in Painting from Yale University School of Art, and B.F.A. from Tyler School of Art. She is currently a professor in The School of Art at California State University Long Beach.