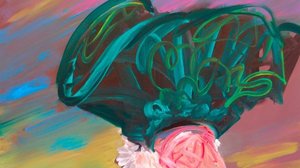 Like many artists, Deborah Brown is a student of art history and literature.  In “Outer Limits,” her latest work at Lesley Heller Workspace, Brown explores territory inspired by her favorite paintings and 19th century novels. Her new paintings, the “Têtes,” are inspired by the tradition of formal portraiture and history paintings and appropriate the costumes, coiffures and conventions of self-presentation inherent in the genres.  The paintings reflect the influence of Cubism, the court portraits of Velázquez, Goya, and David; the work of Picasso from the 30s and 40s; the paintings of George Condo; and fetish and tribal objects from Africa and Oceania.

The work is characterized by a tangle of brushwork verging on abstraction.  The artist developed this vocabulary through a study of the industrial landscape of Bushwick, the location of her studio, where car salvage lots, cement factories and scrap metal yards are common sights. For several years Brown depicted this subject matter though a sci-fi lens that magnified the strangeness of a world where crushed cars are stacked like ziggurats in a mishmash of semi-recognizable debris.

Brown’s latest paintings come from this context where scrapheaps rise like monuments to a post-industrial utopia: Ozymandias meets Blade Runner.  In “Outer Limits,” the artist depicts the human head as a vessel for the organic, the kinetic and the chaotic. What emerges is a hybrid of the mechanical and the organic--a metaphor for consciousness and the divided nature of identity.  Brown’s activity as an artist repositions iconic images in a contemporary context.

Deborah Brown received a B.A. in Art from Yale, summa cum laude, Phi Beta Kappa, and an M.F.A. from Indiana University.  Since 1982 she has lived and worked in New York where she is represented by Lesley Heller Workspace.  She has had one-person shows at galleries and museums around the country.  Her public art projects include mosaics commissioned by the MTA for the Houston Street subway station in Manhattan and roundels for the Royal Caribbean Cruise Terminal at the Port of Miami for Miami-Dade Art in Public Places. In addition to her practice as an artist, she owns and directs the gallery Storefront Ten Eyck in Brooklyn, and serves on the board of NURTUREart, the artist advisory board of BRIC, and Community Board #4 in Bushwick.  This is her fourth show with Lesley Heller.