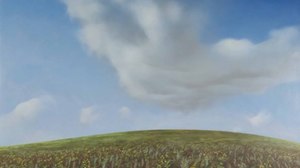 Intricate Expanse features the work of six artists, each of whom creates encompassing compositions without sacrificing a distinct sense of their constituent parts.

The notion of “expanse”, for these artists, includes the physical parameters of pictorial and sculptural space, as well as the sweep of imagery contained within them. “Intricacy” is embodied both through touch and vision, by attention paid to the particularities of surface and process, and the metaphorical allusions that are consequently set into motion.The resulting pieces unfold and disperse even as they are punctuated by a consistent sense of focus.
Mario Naves 2015


Channeling a decidedly American vein of realism--sober, yet not out of sync with the otherworldly--Karl Hartman creates paintings distinguished by their crystalline execution and uncanny quietude.


Maritta Tapanainen mines the rich history of collage to create intimate tableaux that encompass the microscopic and the macrocosmic, the balletic and the whimsical.


With a terse yet seductive touch, and an exacting eye for detail, the painter Sangram Majumdar achieves a tenuous detente between representation and abstraction.


Suffusing post-modernist strategies with symbolist import, Laura Dodson taps into the vagaries of memory with enigmatic narratives that seamlessly conflate the photographic and the painterly. ###