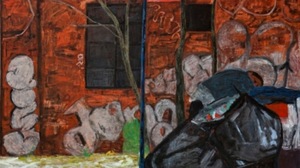 Lesley Heller Workspace presents KEEP OUT, featuring the work of Lisa Corinne Davis, Elisa Jensen, Michael Krondl, Holly Miller, Natalie Moore, and Ellie Murphy. This exhibition explores both the intended and unintended consequences of borders, and argues that borders are the place where real dialogue occurs.

From national boundaries to gated communities, from class divisions to religious affiliation, we create fences, walls, borders and every conceivable kind of barrier to entry. Some barriers are designed to intimidate, like the Berlin Wall, while others wax poetic, as the Yuma/Calexico desert fence. Borders like school zones and voting districts are not physical but can cause strife. Others are barely noticeable, such as the cut in a field of grass dividing Guinea and Sierra Leone. Each border has its own character and level of porosity, but all borders are meant to define, protect, and exclude. Their reasons for being are as numerous as their effects; even as they keep us in or out, they represent the line at which ideas and cultures intermingle.

The overlays of informational structures in Lisa Corinne Davis’ paintings give the viewer a glimpse into the complex relationships of race, culture, and history. Working with the logic of the poet rather than that of a demographer, Davis sets up categories, collects data, codes information, and creates graphs and charts to play with place as a geographical, metaphorical, and metaphysical concept.

Elisa Jensen’s paintings of the Greenpoint, Brooklyn Neighborhood where she lives explore a wide range of boundaries. Her paintings of graffiti explore the ways in which brick walls and razor wire-topped fences serve their intended purpose, while at the same time providing a canvas for creative expression, while her work dealing with bottle collectors and the homeless explores the often invisible barriers we erect in the face of socio-economic disparity.

Michael Krondl's photographs seek to break through the gallery wall, to place the viewer in the space of the image rather than looking at the space of the image. Throughout the history of photography, people with cameras have sought to “capture the moment,” to document a distant (in time or place) reality.  Especially in the case of landscape photography, the images have functioned much like windows, a trope inherited from landscape painting.  Here trompe l'oeil strategy seeks to abolish that distance, to smash the window, replacing the "fourth wall" of the gallery with a wall of ice.

The threaded lines conceal the surface of the canvas in Holly Miller’s paintings, suggesting a tactile and physical barrier that simultaneously works as an opening into the painted ground. An effect of "inside out" is created; a transparency is revealed through the repetitive rhythm of the punctured line.

The scrim effects of Natalie Moore’s woven sculptures explore the dynamics of what is revealed and concealed. Forms harken to structures that have been battled and twisted by the wind and rain, while the hand weaving of common material is both an absurd endeavor and a wandering meditation.

Ellie Murphy’s fabric and acrylic yarn installations evoke the physical and emotional barriers to the entry of a teenage room.  With its nostalgic materials and methods, her work straddles the line between childhood and adulthood while also questioning the borders between fine art and traditional craft forms.

Combining references to doll hair, needlework, folk motifs, feminist art and Americana from her 1970’s childhood in Kansas; these large sculptures describe the tension between the cultural and the personal, between the public and the intimate, and between the comic and the serious.