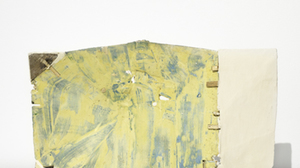 “The end of art is peace / could be the motto of this frail device,” writes Seamus Heaney in The Harvest Bow, but it is an end that is rarely, if ever, easily attained. In between the identified need and the desired end is a process of some turbulence and disorder, wherein the claims of fracture and disappointment must be accounted for.

Helen O’Leary’s new work understands the play between a unifying scheme of resolution and its opposite: how art is to be wrestled from difficulty and contest, and may still cohere on a surface that is given to peace as much as to beauty.

Helen O’Leary’s art draws on her Irish background, and explores with deftness, rigor and craft, the idea of origin, of how everything we subsequently become has been framed by the visual, cultural, moral and emotional lines of definition that are drawn around our formative childhood worlds. In these surfaces, one sees the shadow remnants of ploughed fields and scrubbed wooden tables, of the straight lines of rural conversation and tidy timetables, of the ongoing poetry of season and tide, pattern and ritual.

The beauty of the work is indisputable, but these are paintings which also benefit from considerable intellectual ballast and emotional resonance. As well as their obvious awareness of the painterly tradition, the depth of Helen’s engagement with literature and, in particular, with poetry, is markedly visible in these paintings: Beckett’s restraint, Heaney’s lyricism, Rimbaud’s visionary luminescence, and Chekov’s way of structuring narrative all contribute to the forceful and yet elegant articulation of her work.

There is resolution here, certainly, but it is neither glib nor occasional. What O’Leary offers within her frames are meditative spaces that do not renege on the disarmingly messy business of life, but instead suggest ways in which this might be resolved into moments of intense feeling and deliberate art. As a craftsperson and technician, there is real achievement here: the handling of color, shape and texture reminds us that O’Leary is a painter of profound and noted skill; she is also an artist of sensitivity and range. These are not surfaces easily come by and in their delicate negotiations, they declare a stay on discord and friction, offering to us instead this most accomplished peace.       Vona Groarke

this exhibition has been generously supported by the following:

Helen O’Leary was born in Ireland and attended the National College of Art and Design, Dublin and the School of the Art Institute of Chicago. She currently lives in Brooklyn. She is the recipient of a John Simon Guggenheim Fellowship, Culturel Irlandias Fellowship, Paris, two Pollock-Krasner awards and the Joan Mitchell Award for painting and sculpture multiple grants from the Arts Council of Ireland and Culture Ireland, and research grants from the College of Arts and Architecture, Penn State University. She has exhibited internationally, including solo shows at the MAC Belfast (2016) National Gallery of Art in Limerick, Ireland, the Butler Gallery, Kilkenny, Ireland, Kerlin Gallery, Dublin, Lesley Heller Gallery, NY, Sirius Art Centre, Cobh, Australia; The Zolla/Lieberman Gallery in Chicago; the Victorian College of the Arts in Melbourne, Australia and the Kerlin Gallery in Dublin. Her work has been exhibited widely in Europe and the US, select shows include Fenderesky Gallery, Belfast, N. Ireland, the Taylor Gallery, Dublin, Ireland, the Glasgow Museum of Art in Scotland, South Bend Museum of Art, Indiana, the Galerie le Petit Port in Leiden, the Netherlands, the Denver Museum of Contemporary Art, Up Down Gallery, Kent, UK, and the Contemporary Arts Centre in Sydney. Selected residencies include Joan Mitchell Foundation, New Orleans,  Centre Culturel irlandias, Paris, The Sanskriti Centre, New Dehli, India, The Heinrich Boll foundation, Ireland, Tyrone Guthrie Centre in Monaghan, Ireland and Sirius Art Centre, Cobh, Ireland.She has also been a visiting artist at the National College of Art and Design in Dublin, GMT Galway, the University of Limerick, Ireland, the University of Glasgow, Scotland, Edith Cowen University in Perth and Victoria College of the Arts in Melbourne, Australia; as well as at many universities in the United States. She is currently a Professor of Art at Penn State University.