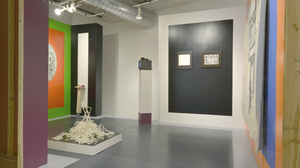 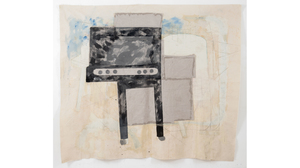 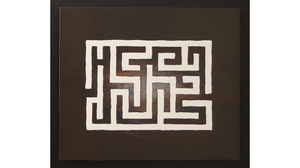 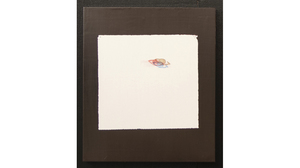 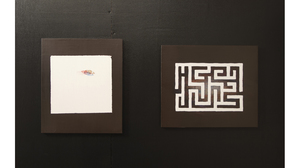 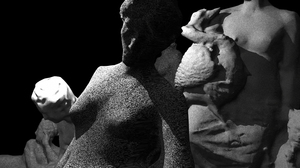 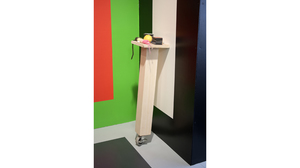 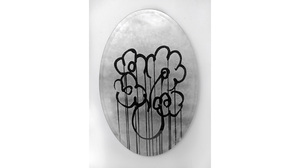 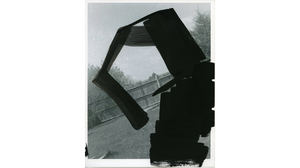 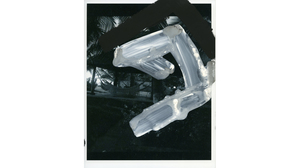 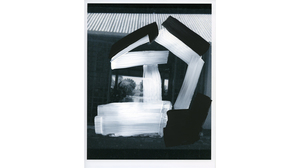 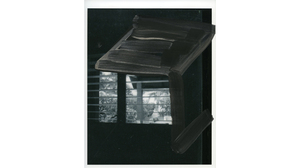 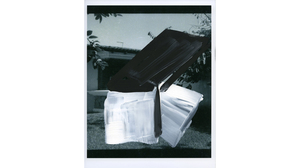 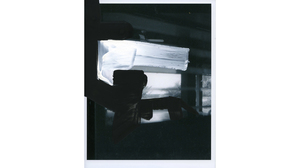 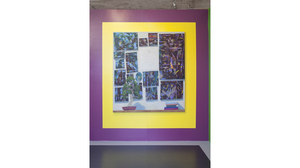 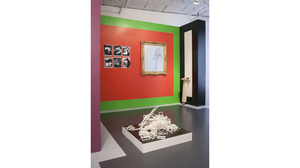 Common Room is an installation of a room within a room. It is both a sculpture as well as a piece of architecture functioning to exhibit the work of eight artists: Eric Brown, Sharon Butler, Paul Gagner, Jule Korneffel, Esperanza Mayobre, David McBride, Adam Parker Smith, and Jenny Vogel.

The central idea of Common Room is to explore where the space of a shared social experience is located:  Do we find it in front or behind each work? Common Room describes an actual and an ideal space: the confines of the location, the colorful and stage-like room as a physical place for the artworks; and at the same time referring to a shared intellectual, illusionistic or abstract space that we jointly inhabit. Each of the artworks in the show occupies the space of this room in its own specific way. While some of the works reach out to the viewer, others create a space beyond our reach; the difference of this perceived and actual space is central to the motif of Common Room.

The room’s structure consists of a wooden platform as a floor and painted plywood wall elements. Each wall, painted with a thick border and in two distinct colors, serves as a frame for one or several artworks. Each individual artwork in turn functions as a window and offers a connection to the world outside the room.

Esperanza Mayobre's sculpture uses the form of the window frame in a miniature form.  With these elements she constructs an architectural structure which over the course of the exhibition changes, falls apart and is rebuilt. Mayobre invites visitors to participate in this process of rebuilding.

Sharon Butler's paintings often depict very basic architectural objects to delineate space within her works. The gas grill represented in her painting symbolizes simultaneously the promise and limitation of middle class culture; the suburban backyard becoming itself a "room”.

In his recent paintings, David McBride has used charged iconography such as masks, mazes or planets. While the image exists as a white stenciled shape, the dark background provides the painterly depth.  It appears the viewer is asked to look past the image—into the dark of the background and into what may feel like the infinite depth of the cosmos.

In her video, Jenny Vogel places digital renderings of actual sculptures into an imaginary and undetermined room. "If monuments are built to help us remember, then their decay must imply our forgetting," The narrator talks about the relationship of place and memory, while the digital space with the rendering of cultural artifacts collapses time and place into an infinite presence.

Jule Korneffel uses a single discarded table leg as a precariously balanced pedestal. On it she carefully arranges a variety of objects. This eclectic collection - cards of color samples, a knitted piece of wool, a lemon among others - are remnants of past activities in her studio, seemingly creating a miniature version of her studio within the show.

Adam Parker Smith’s mirror appears fogged up—someone innocently made a finger drawing of a bouquet of flowers. The work functions as both an innocent prank, but also as a prop which indicates a fictional space, where the mirror and the drawing is part of an unknown yet infinitely intriguing narrative.

William Eric Brown makes use of a decades old collection of his own black-and-white negatives. With a coarse brush he develops an abstract language while painting directly on photographic prints from this archive.  The painting never completely covers the image, and its geometric forms always appear to exist in relation to the image. The work presents two distinctly separate spatial conditions —the recorded space of Brown’s past in the photographic images, and the painterly space as index of his intervention.

Paul Gagner's painting depicts a scene of 16 abstract paintings crookedly hung on the wall in salon style.  He seems to have reversed William Eric Brown’s process to arrive at this representation. While Brown arrives at abstraction by partially obliterating a representational space, Paul Gagner begins with a crude gestural painting onto which he transposes this domestic scene. Each represented painting remains a segment of that larger, otherwise obscured abstraction underneath.

Common Room was first conceived and realized as the second installment of a series of curatorial projects in Björn Meyer-Ebrecht’s studio. It followed the exhibition Communal Table in 2015, for which Meyer-Ebrecht built an oversized table which served as the shared base for sculptures of 12 artists.  The series continues his recent exploration of sculpture as functional architectural objects.  Common Room expands on this exploration and serves as the first time for Meyer-Ebrecht to create a sculpture functioning as usable architectural space.

Björn Meyer-Ebrecht is a German artist who lives and works in New York. His practice ranges from drawing, collage and sculpture to installation and collaborative projects. He recently had a solo show of large-scale ink drawings titled Places for People at Studio10 in Brooklyn.