Artist To Watch, The Art Economist 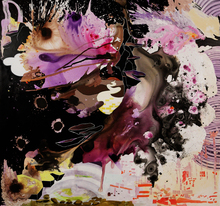 Elisabeth Condon’s sub-tropical travels have inspired a palette of colors, shapes, textures and imagery that do not just depict a scene, but rather, her paintings portray fictive landscapes, where memories of various places converge in an imagined space. Her sophisticated command of all manner of painterly techniques, from Chinese ink brush painting and traditional landscape effects to graphic design-style pattern and opacity, make for multi-layered, exuberant work. Condon’s process involves a combination of observation, reminiscence and chance. The artist begins a work by pouring oil or acrylic paint on the flat surface of a canvas (or linen), and allowing the colors to expand, pool and drip, so that the initial forms emerge out of the kinetic qualities of her materials. These random, abstract shapes become the starting point and compositional template for a painting, which is further enhanced with texture, pattern and imagery. Condon counts texture as one of the most important elements in her work, as it is how she expresses the climate and atmosphere of a place, in tandem, of course, with color. The subjects of Condon’s paintings are gleaned from countless sketchbooks of ink drawings that the artist continually makes, and are inspired by the flora, fauna and geography of all her trips. Condon says her process “mimics the contingency of travel and the fickleness of memory,” and ultimately, she is out to capture not what a place looks like, but rather what it feels like to be somewhere. As a viewer, this dynamic effect can cause a visceral recollection of the many places that we have been. Condon received a BFA from Otis Parsons (1986) and an MFA from the School of the Art Institute of Chicago in 1989. She commutes between Brooklyn, New York and Tampa, Florida, with regular trips to Asia. Prestigious awards include a Pollock-Krasner Foundation grant and residencies in China, Taiwan and the United States, including at the venerable Yaddo in Saratoga Springs, New York. She has exhibited nationally and in Asia, and is represented by Dorsch Gallery, Miami, and Lesley Heller Workspace, New York, which offered her most recent solo show in the summer of 2011. –KWT