From Metropolis to Batman 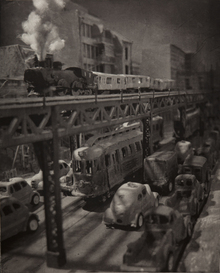 I can almost remember Lothar Osterburg’s New York, except that it never existed. At least I want to remember it, the way one wants to recover a finer and more comforting past. It has the landmarks a New York native wants to call his own, like the Flatiron Building and tenements that gave way long ago. It has a child’s wonder at the big city, like the lights burning in every window as they never have in real life. It has the darkness of an older city, too, like the shadows under the el spanning an entire street, much as it still does elsewhere in the city. I want it to be the train that took my father from the Grand Concourse to NYU dental school—although Manhattan’s Third Avenue el came down in the 1950s, and the School of Visual Arts has that spot today.

Above all, this New York has books. They line the shelves of an old-world version of the great reading room at the central Public Library, a story or two too tall. They somehow share space with a trailer park, stacked as a still more precarious vertical. One book lies open in the foreground, as on a ledge, as mammoth as the Bible on a late medieval pulpit or the Koran on its stand in the Met’s Islamic wing. Less directly, the entire show pays tribute to growing up with print, the kind that the artist pored over as a student in Germany. The photogravures divide into Yesterday’s City of Tomorrow and Library Dreams, at Lesley Heller through March 4, but the titles could almost be synonyms, and the two series could easily be one.

The second came about in collaboration with Osterburg’s wife, Elizabeth Brown, a composer. The first brings the artist down to earth, after more ominous and obvious fantasies of outer space. Both begin with painstaking models in paper, plaster, and whatever else it takes. The miniature library is on display, too, along with the prints. Then he chooses an old-fashioned medium rather than straight photography. Its sepia and grain add texture and distance, as in fantasy or memory, but then so does plaster dust.

That dust shrouds early-model automobiles beneath the el, maybe one’s first clue that these memories belong to others—or to no one at all. But then the Flatiron Building on Fifth Avenue never towered over the el, and trailer parks never stood nearby. I could not possibly remember the Sixth Avenue or Third Avenue el anyway, much less airships out of the 1933 “Century of Progress” Chicago World’s Fair. The darkness of midtown south coming out of the 1970s was all too real, as in photographs by Jill Freedman. So were my own years in an illegal loft across from a topless bar not so very far away. Osterburg, though, describes longings for a past and a future that neither of us could have seen.

They take a certain will to believe even for the artist, who moved to New York in the mid-1990s and to the United States earlier still. One can imagine what urban America meant to someone elsewhere, which helps explain the setting in time, when immigrants still came through Ellis Island. This model city belongs to both continents, to Metropolis and to Batman. The locomotive bursting into the library belongs to René Magritte, who has it coming out of a European fireplace. Perhaps the entire show belongs to that painting’s title, Time Transfixed. Of course, the point of that title for Magritte, too, is that time is slipping away.

Dioramas and prints shared space last year at the Museum of Arts and Design, in “Otherworldly,” not a bad title for this show either. Do Ho Suh then made a miniature on an even grander scale, with a clearer fixation on the past. Both, however, were quite worldly at heart. The first fixed on the artists’ studios or a familiar America, including New York subways, while the latter combined his childhood home with his college town. James Casebere models real suburban anonymity. By contrast, Osterburg indulges in dreams that Modernism outgrew, but you may think that you remember them, too.