The Latest Vibe Moved to Brooklyn 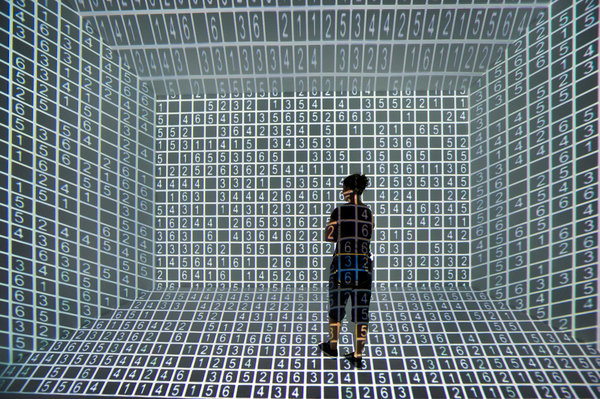 For artists New York City has always had unaffordable neighborhoods. Now it has an unaffordable borough, Manhattan. There, in the past, blue-collar areas like Greenwich Village, SoHo and the Lower East Side offered cheap living for the no-collar day-jobbers that most artists were and still are. Rents were such that they could make their work upstairs and show it downstairs. Art was a cottage industry. Then came the 2000s and money and Chelsea, which is the equivalent of a suburban mall: a business district, a consumer zone.

A few artists went there to show; most went to look and then go home. Increasingly, in the past decade, home has been Brooklyn, starting with Williamsburg, then moving outward ahead of the real-estate cash tide. For a while now the buck has stopped at Bushwick, a scrappy, ethnically manifold, postindustrial jumble of a place abutting onto Queens. At street level it’s mostly bodegas, fast-food shops and auto repairs. But artists are there, lots of them.

For the sixth annual Bushwick Open Studios celebration last weekend, more than 500 artists made their work spaces, which were often also their living spaces, accessible to anyone who wanted to look. Others exhibited in the area’s two dozen or so galleries. Still others displayed their wares at Bushwick Basel, a miniature art fair housed in the studio and sometime alternative space belonging to Jules de Balincourt, a Bushwick painter with an international reputation. When you tote up the numbers, and factor in the local talent too shy or unready to show, you’re talking serious art-population density, so serious that Bushwick can really no longer be considered a buzzy frontier. As if in proof of a budding mainstream status, a major Chelsea gallery, Luhring Augustine, recently established an outpost here, and a very Chelsea place it is: blank and thick walled, like a bank vault.

But what does frontier mean anyway? Does it — should it — mean something about the kind of art being produced? It meant that in SoHo in the 1960s and ’70s, with the emergence of new media (video, installation, sound art), and in the East Village of the 1980s, which could claim an apocalyptically minded post-punk aesthetic, not to mention Neo-Geo.

But since then art has professionalized and industrialized. Schools pump out artists; artists pump out vast amounts of art. The market, as embodied in art fairs, has become a bulk operation, favoring the smooth-selling tried and true — painting, sculpture — over experiment. An ancient avant-garde model of the artist as creature of high ideals, messy habits and no expectations has been revised to accommodate competitiveness, personal polish and an agenda for professional success.

To what degree those elements shape artists’ lives in Bushwick today I can’t say. More than once during a recent gallery and studio walkabout I had the sensation of being in a giant M.F.A. graduate show, with all the cautious, self-conscious formalism and too-tight ideas that implies. At the same time, the general atmosphere was school-like in a good, utopian way: people working side by side, artists enjoying other artists, Manhattan a mere mirage in the wide Bushwick sky.

Seeing art in the neighborhood, though, requires some effort. Bushwick is big; galleries are spread here and there, spilling over into Ridgewood, Queens. One way to organize a tour is around a couple of L line subway stops, each near different gallery clusters.

The Morgan Avenue stop, the first of the two if you’re coming from Manhattan, is close to a converted warehouse with several galleries at 56 Bogart Street. Momenta Art, a tenacious nonprofit space, moved here a year or so ago from Williamsburg, bringing with it a politically minded sensibility fairly rare in Bushwick, evident in a series of photographs by Mark Tribe that look like Romantic landscapes but are lifted from paramilitary-theme video games.

By contrast, abstract work at adjoining galleries — Meg Hitchcock’s fine-grained collages made from printed Koran and Torah pages at Studio 10; Andrew Zarou’s silvery geometric collages at Robert Henry Contemporary — is characteristic of a kind of hands-on, somewhat hermetic, kitchen-table-scale art that the neighborhood has a lot of. (Austin Thomas’s delicate cut-and-paste mandalas at Centotto Gallery a few blocks away fit the category.)

It has a lot of performance art too, with one example at yet another gallery in the building, Bogart Salon. There a Bollywood-style soap opera called “Isha: A Tell All Tale,” starring the artist Meenakshi Thirukode — and described by the gallery as the story of a young South Asian woman’s “dramatic journey through the treacherous shoals of the New York art world” — has been in production as recently as last weekend, with gallery visitors recruited to take on sundry roles. More scenes will be shot on the premises this weekend. In one, Isha comes up against a demonic curator; in another, she’s reconciled, via Skype, with her family back home. Drop by and get ready for your close-up.

From 56 Bogart, Luhring Augustine is but a short walk, and one worth making to take in a light-show-type video installation by Charles Atlas, an artist with no known connection to Bushwick. Within striking distance too is Kesting/Ray, a second Manhattan transplant, but one more purposefully integrated into its new environment.

Appropriately, in a neighborhood rich with outdoor wall paintings, Kesting/Ray’s inaugural exhibition is in a street-art spirit. A centerpiece sculpture by Ben Wolf is made mostly from urban junk, and there are several wheat-paste prints by the artist known as Swoon, who also has paintings on the building’s facade. The paintings were there before the gallery was. This artist created them some time ago for a friend, the photographer Tod Seelie, who lives on the block, and is in the show.

A few minutes’ hike to Flushing Avenue, a main thoroughfare, and a bit beyond will take you to two of the area’s veteran spaces, both a few years old. English Kills, open since 2007, has an alleyway entrance and spiffy installation of small resin sculptures of females figures — part Willendorf Venus; part, maybe, Smurf — by David Pappaceno.

At Storefront Bushwick, a former tax accounting office, there’s a single abstract sculpture by Drew Shiflett about the size and shape of a suitcase, and exquisite thread drawings by Adbolreza Aminlari that could easily fit inside. A fresh arrival, the subterranean Airplane, has a multidisciplinary program — “curated shows, food events, seminars and collaborations” — of a breadth that Chelsea would never imagine, and a nicely funky group show to boot, with a robotic skeleton by Tim Belknap, twitching away in the backyard, being a highlight.

Finally, near an art-friendly cafe called Little Skips, there’s Microscope Gallery, which gained some notice last fall when the artist Marni Kotak delivered a baby there as a performance piece. The current show of photographs by Emma Bee Bernstein is conventional by comparison, but quite moving. The pictures of Ms. Bernstein and her friends could easily be mistaken for portraits of smart young Bushwickians, but they exist under a shadow. She died, a suicide, at 23 in 2008, and the images are from the archive she left behind. On June 18 a film about her life by Henry Hills will be screened at the gallery.

The Jefferson Street stop is the jumping-off point for another set of galleries, which are fewer and farther apart. The Active Space, in a former factory, is a white box with hardwood floors, like SoHo of yesteryear. Large, brushy paintings by Deborah Brown, each a kind of sci-fi image of Bushwick’s salvage yards and low-rise shops, look great here.

A salute by this mid-career artist to her home turf, the show is also a tribute by the gallery to Ms. Brown, who runs Storefront Bushwick and has worked hard for years to make the neighborhood welcoming to new art.

Along with a couple of galleries the Active Space building houses a number of rentable studios in a pattern repeated elsewhere. In former factories on Troutman Street, galleries like Sugar at 449 and Regina Rex, at 1717, are embedded in studio environments, creating a mixed-use model that, again, recalls 1970s SoHo, where making, exhibiting and selling of work were all, to some degree, controlled by artists.

Along these lines Regina Rex is collaboratively run by a group of artists, several originally from Chicago, who organize the shows. (An exhibition of paintings by E. J. Hauser, Nancy Haynes and Sarah Peters opens there on Saturday.) Gwendolyn Skaggs, founder of Sugar, is an installation artist who has turned her energies to presenting the work of colleagues, many of them from the Midwest where she grew up, in carefully judged arrangements.

Ms. Skaggs’s particular interest in performance and film has made her an important figure in a gallery scene that otherwise has a notable, even excessive, investment in painting.

But the real catalyst behind Bushwick’s performance and dance programming is Jason Andrew, who runs a nonprofit gallery called Norte Maar out of his small Wyckoff Avenue apartment.

The main show there now is a solo of paper-and-film collages by Oliver Ralli, the guitarist and singer for the Brooklyn band Pass Kontrol. (Most of the collages were designed for fliers and CD covers.) But the gallery’s permanent attraction is a classy display, hung floor to ceiling in Mr. Andrew’s bedroom, of artists he particularly likes, among them Rico Gatson, Amanda Trager, Michelle Jaffe and Ellen Letcher, all of whom either live or work in Brooklyn.

A solid, mature group, they demonstrate the critical mass of creativity in the area, but also what’s missing, or at least hard to see: namelywild cards of a kind you’d think alternative art neighborhoods would exist for. I chanced across one example during a studio trek in the work of a young artist named Matt Richard, who had turned his closet-size room-within-a-room space into an enveloping Day-Glo green landscape of tiny plastic figures and trees, which he uses as source material for YouTube videos. It’s a sculptural wonder of fevered complication.

There’s a comparably driven, make-your-own-world element in the work of the painter Fred Valentine, who has his own shoe box of a gallery, called Valentine, a few blocks away from Norte Maar in Ridgewood, where he’s now showing two other painters, Cathy Nan Quinlan and Kurt Hoffman.

Art maps circulated for open studio weekend suggested that Valentine marks an outer limit for gallery expansion in a Queens direction. But surely this is wrong. Galleries are constantly coming and going. I was well aware of several that I wanted to get to and didn’t (the Parlour, Wayfarer’s Gallery, etc.), and of others that had disappeared, or would soon be no more (Botanic, 950 Hart, etc.). Rents are rising in Bushwick. The place is changing. But, then, it always has been.

If you want some historical perspective, you can do no better than to conclude a tour with a visit to one last space, the Living Gallery, part of an indoor mall complex on Flushing Avenue.

The exhibition there, “Defying Devastation: Bushwick in the 1980s,” is the joint work of the writer Vanessa Mártir, who was born in the neighborhood, and the photographer Meryl Meisler, who taught in its public schools and took pictures of its residents, the young Ms. Martir among them.

Together they tell the story of Bushwick long before the art wave got there, when, shattered by poverty, racism and civic neglect, it was seen by many as a ruin that would never rise. Now it’s rising, and art is helping it, just as it is helping art by giving its makers a place to go. Ideally such synergy would hold; it can’t, because it never does. Still it’s hard not to feel a tug of hope under those big, open Bushwick skies.

THE LIVING GALLERY “Defying Devastation: Bushwick in the 1980s,” 1087 Flushing Avenue (inside the Loom); through June 25.