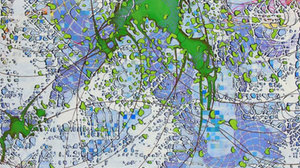 New York, NY–February 19, 2010–Lisa Corinne Davis’s paintings in oil on panel show her fluency in adapting abstract forms to the expression of meaning.  Her forms have a rigorous ferocity that evokes wild-style graffiti, a kinship that is echoed in a color palette full of brights and contrasts, rendered with clean draftsmanship that sometimes echoes the “pop” of commercial illustration.  Using a vocabulary of forms as individual as a fingerprint, she explores themes of hybridization, identity, and representation.

The proliferation and diversity of forms in her compositions stimulate the natural human desire to label and categorize.  Some of her paintings teem with potent life, like a slide seen under a microscope, complete with microbes and dust mites, or larger forms like larvae, leaves, vines, seeds, stamens.  Other works seem to draw inspiration from the inanimate world of circuits and motherboards, or the world on a macroscopic scale: roads, maps, city blocks, geographic fault lines. Even as the eye seeks to break down these swarming forms into manageable groups, however, Davis’s paintings reveal the futility of the brain’s impulse to force objects -- or people -- into preformed categories. Drawing on her background as an African-American of mixed heritage, Davis builds a strong message about the inability of labels to encapsulate the meaning of the whole.  These works encourage the viewer to accept the plurality of life, coaxing a pattern that may seem chaotic to emerge as peaceful and harmonious by virtue of its very contrasts and dynamics.

Davis lives and works in Brooklyn, NY.  Her work has been exhibited in museums and galleries across the United States and Europe, and is included in such prestigious collections as the Museum of Modern Art in New York, the J. Paul Getty Museum in Los Angeles and the Victoria and Albert Museum in London.  She has received reviews in The New York Times, Art in America and ArtNews, and is the recipient of numerous awards including The Louis Comfort Tiffany grant, a National Endowment for the Arts' Visual Artist Fellowship, and two New York Foundation for the Arts Visual Arts Fellowships.  Davis’s teaching career spans fourteen years.  She has taught at Parsons School of Design, Cooper Union School of Art, and Yale University.  She currently serves as Associate Professor at Hunter College in New York.