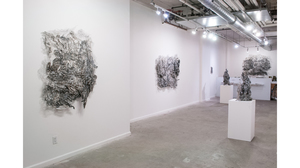 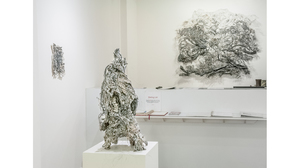 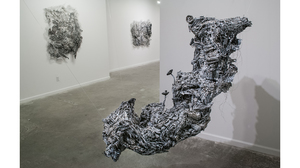 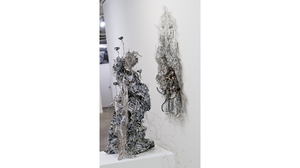 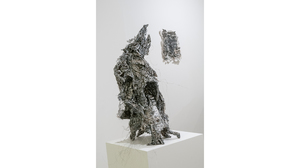 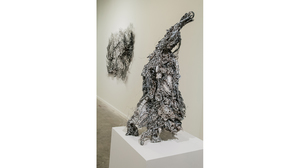 Lesley Heller is pleased to present the sculptures and wall pieces of Dana Melamed. This is Melamed’s first exhibition with the gallery. This exhibition represents an important milestone in Melamed’s work, namely the transition from wall pieces with 3 dimensional elements to sculptures, expanding the narrative of ongoing power struggle between humanity and nature.

Although her works have no specific reference to time, place or historical events, viewers are always encouraged to draw their own personal reflection, which may explain the fact that viewer interaction with Melamed’s pieces transcends cultures and generations.

Melamed has been dealing, in her previous exhibitions, with the effects of human aggression against nature and mankind itself. Human aggression is a part of human nature, perpetrated by the drive to change the environment and create a desired habitat for one’s own tribe. During that struggle, other tribes, groups and collectives, as well as nature’s needs fall victims. But as much as the primal drive for survival is ingrained in the human organism, so does it in nature itself, and the struggle is a never-ending cycle.

In her new works, Melamed is disengaging from the walls to create sculptures in the form of bio-mechanical structures, symbolizing the outcome of the struggle. She focuses now on the DNA, the genetic code programmed into every living organism, and dictates much of its behavior. Battle lines are drawn at the “transitional voids”, and each DNA is driving its organism into the opponent’s environment, to fill the voids and claim it as its own.

Melamed’s use of organic materials alongside of industrial ones, and destructive techniques - such as scorching and slashing - all support the narrative. Fire supported mankind’s survival and its territorial struggle against nature, but proved to be an equally destructive and uncontrolled force used against mankind itself. As such, the creative process by fire is an uncontrolled one, both fusing the layers together as well as disintegrating certain elements in them.

Inventions, such as the engine, enabled effective tribal disputes and human advancement, but turned out to be a double edge sword with no loyalty to any one tribe. Cities were destroyed by the same powers that were created to benefit them. In Melamed’s works, mechanical tendrils grow organically on the surface and into the space around it, transversing the layers, generated in some and terminating in others. Melamed: “The nature of this struggle, for survival, is what makes it so violent”.

Melamed, an Israeli native, is an established artist, working in NY for the past 7 years. Her works have been exhibited in museums like the National Academy in Manhattan, the Neuberger museum in Purchase NY and Hunterdon museum in NJ, as well as leading galleries in the USA & Europe, and are part of multiple public and private collections