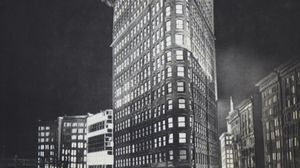 Lothar Osterburg’s upcoming show at Lesley Heller Workspace features new work completed during the year supported by his Guggenheim Fellowship. Working from memory, using small-scale models built quickly and intuitively by hand from readily available, found material, Osterburg creates images of lost or imagined worlds. Photographed, then printed in photogravure, they become timeless. The soft focus, the scratches and traces from the photogravure process, and the use of rough and unfinished models all work together to suspend the final image somewhere between the real and the imaginary.

“Imagining New York”, created in the artist's Brooklyn studio, is a delightful amalgam of fact and fiction. Osterburg's New York is a great city of endless possibilities, as imagined by people from afar who may never be able to visit. The images are drawn from forgotten or imagined times during the heyday of photogravure, the1860’s through the 1930’s, when great waves of immigrants came to Ellis Island.

Growing up in Germany, Osterburg’s idea of New York was far from reality. Books from the local library were at least twenty years old, and the stories told by his great aunt, who had worked in America in the 1930s, were historic accounts. Movies and literature gave skewed or fantastical perspectives, while stories from visitors described only a narrow, simplified tourist’s point of view. Images from these pre-New York days persistently resurface and find their way into “Imagining New York”.

The “Library Dreams” series, begun during a residency at the Bogliasco Foundation in Liguria, Italy this spring, grew out of a new video collaboration with composer/thereminist Elizabeth Brown: “A Bookmobile for Dreamers” will be premiered in April. Ten years after launching his soap library series, Osterburg has come full circle. All his libraries are recreations of imagined places, and in this new series, the books themselves become building materials, while the books' content spills out to inspire new worlds.