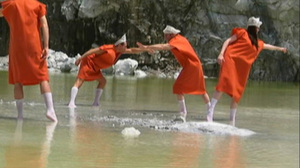 In his book The Gay Science Nietzsche talks about a time in history when the state of being alone was not a pleasure, but a punishment and the notion of the individual was a burden or worse. Nietzsche considered morality a herd instinct; we take our cues from the bodies and minds of other people.  Remorse, he said, is the bad conscience human beings feel about their own individuality.

This exhibition features the work of 6 video artists and a filmmaker—now living and working in New York, Prague and Berlin, who have recorded events or staged performances that replay the individual’s dynamic relationship with a group, showing us how we behave when other people are in the room. The works unfold through loose or fragmented narratives while the filming itself is a basic social act.

Each artist explores these ideas in a different public or private setting spanning three decades from l981 to the present:  a laboratory-like space, a limestone landscape, a make shift domestic interior, the streets of New York City in l988 and 2010, and a close up interior where we find a woman in a burka bending over the body of a lobster. Her inner monologue explores and wrestles with the political and social dynamics of the person (inside) to the group (outside). In the single documentary in this screening Traffic by Perry Bard we see bodies jostle for advantage while warily scanning the street.  The camera returns to the same woman vendor three times. In the final shot of her the film slows down as we see the backward motion of her body as she observes herself being observed.

In every work shifts in perception and understanding occur as the coordinates of actual physical space morph into psychological space and find their way into virtual spaces of film and video that McLuhan once called the technological extension of our central nervous system.   ( LM— Dec. 2011)