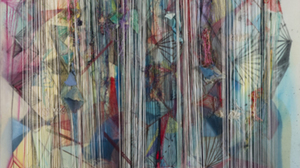 Three Colorists, curated by Michael Walls, highlights the work of three artists who have several things in common: they began their professional life as painters; the oeuvre of each importantly involves the role of color; and the work of each is not only labor intensive, but also revealing of a hard-won mastery of the chosen craft.

Alan Kleimancreates near-monochromatic paintings out of twenty or more individual layers of pigments.  He mixes them slowly, covering the rectilinear surface with oil paint, while simultaneously removing much of the medium through his distinctive all-over drawing. The completed work appears from a distance to be a single hue, but reveals on closer inspection two or more of the underlying hues. The web-like surface rewards scrutiny from varying distances.

Eozen Agopian has joint citizenship in her native Greece and in her adopted United States. Having worked in Athens for many years, she is presently establishing a studio in Queens. A lifelong painter, her recent work is divided into two separate, though closely related, investigations: paintings executed in oil and/or acrylic on canvas, and her “thread paintings,” in which layers of colored cotton and silk thread seem to hover above the painted ground. She is represented in this exhibition by the thread paintings.

Diane Mayo, a native of Syracuse, New York, exhibited in New York for several years as a makerof small, poetic landscapes inhabited by animals having an enigmatic presence. The result of her taking a course in ceramics in 1984 was a metamorphosis from being a painter to a maker of ceramic vessels and sculptures involving the raku process. Sculpting these works in the Montauk studio which she has occupied since 1979, she has explored a fascinating range of structures and imagery. She is represented by several new works– asymmetrical and bulbous in shape, based upon clay vessels from the Bronze Age Cypriot culture. Her life as a painter and a remarkable colorist continues in the application of glazes to these works before the raku firing.