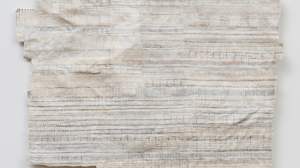 Lesley Heller Workspace is pleased to announce a solo exhibition of recent works by Drew Shiflett, her third exhibit with the gallery. Opening September 5, the show will run through October 14, 2012.

Chicago born, New York-based artist Drew Shiflett examines surface, structure, and texture in complex works that are defined by process and material. Imbued with a delicate fusion of architecture, ritual, and geometry, one of the essential components in this body of work is the evidence of its own making. Shiflett’s methodology is one of simple acts -- cutting, gluing, layering, mark-making – through which she generates rich abstractions and the intricate motifs of her “constructed drawings.”   Employing a vocabulary that is distinctly post-minimalist, she expands on ideas that exist within grids, patterns, and lineal structures to create labyrinthine, densely layered, and often sprawling compositions that hover between sculpture and drawing.

More devotional than obsessive, Shiflett’s process is as meticulous as it is unorthodox. She articulates spatial relationships intuitively, building content through a technique that requires the precision of a miniaturist, the discipline of a Hindu monk, and that engages a meandering serial narrative the likes of The Canterbury Tales. The eccentric pictorial logic that has come to define Shiflett’s work is located here, within the process itself.

Tactile, earthly and meditative, drawings such as Untitled #60, 2011 conjure ancient Egyptian textiles, animal hides, and the sort of organic geometry that has the ability to morph between Byzantine networks of parallel lines and sprawling hyperbolic planes. Her palette, variants of ochre, sepia, black, and white yields surprising diversity and this, in combination with the translucence she finds in handmade paper, cheesecloth, and fabric bits coalesce into complex and enigmatic abstractions.

Drew Shiflett received her BA from Columbia College Chicago and her MFA from the Hoffberger School of Painting at the Maryland Institute College of Art in Baltimore. A 1992 recipient of a Guggenheim Fellowship Award in Sculpture from the John Simon Guggenheim Memorial Foundation, Shiflett has also received Artists’ Fellowship Awards from the New York Foundation for the Arts in Sculpture (1990) and in Printmaking/Drawing/Book Arts (2009) and a Mid Atlantic/NEA Regional Visual Arts Fellowship Award in Sculpture (1993). She has mounted numerous one-person shows at venues including Guild Hall Museum (East Hampton, NY); The Drawing Room (East Hampton, NY); Islip Art Museum (East Islip, NY); InterArt Center (New York, NY); White Columns (New York, NY); and Fashion Moda (Bronx, NY). Shiflett has lived and worked in New York City since 1979. This is her third solo show at Lesley Heller Workspace.