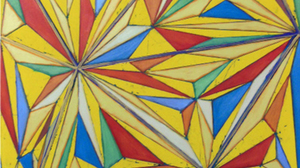 Gallery 1: Lesley Heller Workspace is pleased to present the paintings of Devin Powers in his first gallery solo exhibition in New York City. Powers explores forms drawn from unusual geometries. He follows the nature of these spaces as well as contradicts them, creating a vibrant dissonance within the order of the composition. Powers gives equal weight to the content embedded in the paintings and the structures that elicit them.

In the painting Path, the space feels architectural, evoking the ribs of a vaulted cathedral. In other works, such as the recent painting Storm, the lines seem to be in motion; the dense, layered network manages to summon the drama of action painting. The color and the scraped traces present in the works add to this energy.

Powers enjoys the “grit and smudge” of his handmade process. It is a metaphor for “how this Apollonian or Platonic mathematical world brushes against our messy reality.” The patterns he makes have no fixed answer, yet they evoke a semblance of infinity - for Powers, painting is about discovery.

Devin Powers received a BA in Studio Art from Bennington College in 2005 and an MFA in Painting and Drawing in 2009 from Brooklyn College. Since graduation he has had three solo exhibitions; “Things Keep Their Secrets” at Win Wilder Hall in Rockland, ME, “Unification” at the Kent Place School Gallery in Summit, NJ, and “Clotho” at the Brooklyn College Library in Brooklyn, NY.