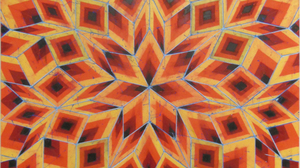 Gallery 2:  The New Picture Plane looks at the work of six painters who explore the changing consciousness of space. In each case, computational systems are used or referenced, but the resulting image is more than the simple product of an algorithm. There is a subjective, often expressive element infused into the logic of the picture. Much as Romantic painting’s depictions of ruins signaled the rejection of the classical model, the tendency to favor complexity over the reductive, clean uniformity of non-gestural abstraction, points to a changing definition of space and order in The New Picture Plane painters. The show focuses on artists who explore space influenced by science and technology through the ancient practice of painting.

David Brodyconstructs complex worlds that manipulate and reinvent the conventions of perspective space through paint. Building dynamic spatial systems that glide and grind against each other, Devin Powers pushes a tension between the classical orders of sacred geometry and contemporary constructs of space and cosmology. In Tony Robbin's recent work, quasi-crystal structures emerge and dance about a hazy green ground exposing planes of soft-hued form counterbalanced by a few passages of strong cadmiums. Jered Sprecher’s painting exposes the dichotomy between geometry/reason and gesture/emotion creating paintings that could be described as a kind of geometrical expressionism. Siebren Versteeg's Clown_854 extends gestural abstraction  through a generative process, replacing the brush with code, creating marks that closely simulate the evocative quality of analog paintingand in some cases, magnify its effect.Laura Watt's intensely layered staccato of free-form networks in loose line andshimmering color evoke the awe of complex digital systems filtered through the human hand.