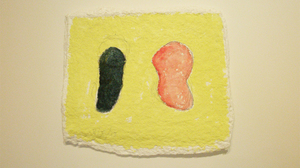 Lesley Heller Workspace is pleased to present recent watercolors by Ron Gorchov. Gorchov’s poetic compositions act as a prelude to his larger works and give insight into his creative process. Known for being ambidextrous with a brush, Gorchov’s watercolors are a meditation on form and color and often contain a dualistic narrative. His color permeates through the pure white ground of the paper. Texture is ever present in the work due to the thick porous surface of the handmade paper.

Often referencing Greek Mythology, studies for “Medusa” and “Cordax” conjure heroic battles or ancient spectacles. Indeed, “Cordax” refers to a provocative mask dance within Greek comedy.  Gorchov’s biomorphic forms float and hover within the blue ground interacting with the light washes of the watercolor paint creating a sense of drama.  “Andromeda” recalls the Greek myth in which an argument between Poseidon and Aethiopia result in her being chained to a rock to be sacrificed to a sea monster. In this case, Gorchov’s grey form looks as though it will engulf the fainter sliver of green shape of Andromeda.

Gorchov’s  reflections on art and painting have inspired many painters.  “I think painting, per se, is an ideal way to criticize the work you already admire because that way you can take the best things in it and try to make your work to be the next consequential step. I mean, to me, that’s a given tradition in creative thought: to build on what you’re seeing that you love and try to bring it to new and unknown terrain.”  RG

Ron Gorchov was born in Chicago in 1930 and has been living and working in New York since the 1950s. His first appearance on the scene was in 1960, when he was included in the Whitney Museum's Young America 1960: Thirty American Painters Under Thirty-Six exhibition. Gorchov also had showings atTibor de Nagy Gallery from late fifties to late sixties and Marilyn Fishbach Gallery in the mid-seventies. In 1972, Gorchov installed two of his "experiments in neocontructivism: multipaneled stacks of heraldic monochromes"at the Everson Museum of Art in Syracruse, New York. Gorchov's career has included showings at Patricia Hamilton Gallery from 1978-1980, followed by Marlborough Gallery 1981-1984 and Jack Tilton in 1990-1994. He is currently represented by Cheim and Read, New York.