The Language of Painting, curated by Carol Salmanson 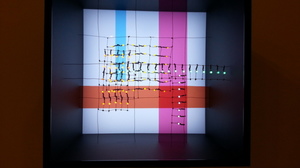 Ask every painter. All of them will say that their work is about light, line, form, and color. But there are many other artists who don't paint, who have co-opted the same language to create vocabularies entirely their own.

All of the artists in "The Language of Painting" use other materials in a way that unmistakably comes from painting. They re-combine painterly concerns idiosyncratically, carrying the principles of picture- making into their various forms.

Perhaps the first to do this was Picasso with his monumental sculptures, such as the sand-blasted concrete “Portrait of Sylvette” In University Village in Soho. The artists in this show, by contrast, use the keyed up hues of today, reflecting the contemporary industrial or commercial materials they use, and demonstrating anew how these materials have transformed our world into an explosion of color.

None of these artists would be able to do their work in other eras. The availability of commercial materials, affordable power tools, and technology to do it simply didn't exist in the past. Perhaps because of the freedom from painting and its history that these elements offer, there is a markedly playful quality to their work. In all cases, there was considerable experimentation before they found their working methods, a sense of "let's try this." As a result, the work of each of them each contains rigor and levity at the same time.

Empowered by the explosion of technological innovations of our time, each has created a unique vocabulary which not only comes from painting, but adds new dimensions to the language of contemporary art.

Martha Clippinger received a BA in Art History from Fordham University and an MFA in Visual Arts from Mason Gross School of Art, Rutgers University.  She is represented by Elizabeth Harris Gallery in New York and has received fellowships from MacDowell Colony, Edward F. Albee Foundation, Marie Walsh Sharpe Art Foundation, and the Atlantic Center for the Arts.  In 2014, she will travel to Mexico as a Fulbright-García Robles research fellow.

This fall she will showing in a group show of site-specific installations Doings and Undergoings at Teachers College at Columbia University, the outdoor installation “Raritan River Ribbon” at the Hunterdon Art Museum, and “The End” at the DUMBO Arts Festival.  Daniels exhibited the solo show Paradise Pieces at the Hunterdon Art Museum in the Summer of 2013.  In 2012, Daniels received the Claire Weiss Emerging Artist Award  for Ornamental Paths at Joyce Kilmer Park, installed St. Nicholas Park Mesh in St. Nicholas Park for which she was awarded a LMCC, MCAF grant and exhibited Paradise Pieces at Station Independent Projects. She also been awarded a Puffin Foundation Grant, an AIM 30 participation at the Bronx Museum, a PS. 122 Project Studio, a Artist-in-Residency at the Henry Street Settlement, a Marie Walsh Sharpe Art Foundation The Space Program grant and a NYFA Fellowship in Painting. She holds a B.F.A. in Painting from RISD and a M.F.A. in Painting from Johnson State College.

Vicki DaSilva is a light graffiti and light painting photography pioneer. She has been making single frame time exposure photographs at night since 1980. She received her BFA from Kutztown University of PA in 1983. She relocated to NYC and was heavily influenced by graffiti art and culture during the birth of hip-hop in the 80’s. She also worked for Richard Serra throughout the 80’s. Her photographic work with fluorescent tube lamps is a direct result of the information she gained from his work and her interpretation using light to define space, volume and weightlessness. Vicki DaSilva’s work has been featured in solo and group exhibitions at Woodward Gallery, The Four Seasons Restaurant NYC, Cheryl Hazan Contemporary, Snap! Orlando Photo Festival, NADA Art Fair, AS Artists Studios, Art Basel Miami Beach and Fountain Art Fair among many others. In 2012 DaSilva was the Solo Grand Prize Winner of Art Takes Times Square, the international competition by See.Me. Vicki DaSilva is a two time PA Council on the Arts Fellowship recipient for photography. Her work is in numerous private and public collections.

Lives and works in Paris and was raised in a small rural town in southern France. She studied in the U.S., receiving her BFA from the University of Oklahoma and her MFA from Yale. She has shown throughout France, at the Musée d’Art Moderne de la Ville de Paris, the Centre Pompidou, and the Chateau d’Avignon, at the Ho Ham Museum in Seoul, la Casa de Americas in Madrid, the French Institute in Rome and Naples. She has recently exhibited at the LAB Gallery in New York, has created a mnumental sculpture for the Taubman Museum in Virgina, and is preparing a large scale installation for the new Public Library in Houston Texas. She also just had a one woman show at Red Arrow Contemporary in Dallas, exhibition that will travel to Houston to Longnecker gallery in September. She is represented in major museums and private collectioins in  France and Europe.

Joan Grubin is a Brooklyn-based visual artist who makes dimensional installations and objects in paper that deal with issues of perception and color. Grubin has shown her work in solo and group exhibitions in and around the New York area and beyond - in galleries, universities, non-profit spaces, and museums, including the New York Public Library, the Parrish Art Museum, the Weatherspoon Museum, the Islip Museum, the Katonah Museum of Art, the University of Maine, the New York Institute of Technology, and the Kentler International Drawing Space. She was awarded a New York Foundation for the Arts Fellowship In 2008, and was a MacDowell Colony Fellow in 2012.

Lynne Harlow works in a language of reductive abstraction to produce sculpture, drawings, installation and performance.  Her work is exhibited frequently in the U.S. and internationally, including a current group exhibition at the RISD Museum of Art in Providence, RI and an upcoming solo project at MINUS SPACE in Brooklyn, NY.  In 2002 she was a visiting artist at the Chinati Foundation in Marfa, TX and in 2011 she was the recipient of the MacColl Johnson Fellowship.  She holds an M.F.A. from Hunter College, CUNY.

Doreen McCarthy lives and works in New York City.  For over 30 years, her work has been exhibited  in  numerous group and solo projects in the United States and internationally in China, Europe and Japan.  This year Transparent Alchemy, a solo exhibition of new photographic works was presented at Galerie Junger in Shanghai, China.  Additionally, Indiana University Center for Art and Design presented Air Clad, a solo exhibition of her large scale inflatable sculptures. Cummins Engineering simultaneously exhibited her sculptures in their corporate lobbies in Columbus, Indiana.  This fall a project in the lobby of 200 Freidrichstrasse, Berlin, a building designed by the architect Philip Johnson, will feature another solo installation of new inflatable sculptures.

Gelah Penn is an installation artist whose work has been exhibited widely, most recently at Lori Bookstein Fine Art, Jason McCoy Gallery, the National Academy Museum, and Smack Mellon, NYC; Carl Berg Projects and Jancar Gallery, Los Angeles; Real Art Ways, Hartford; Brattleboro Museum, VT; Vox Populi, Philadelphia; and the Museum of Arts and Crafts, Itami, Japan; and is in the collections of the Brooklyn Museum, Columbus Museum and the Cleveland Institute of Art. Her work has been reviewed in Art in America, The New York Times, The Brooklyn Rail, The Los Angeles Times and a feature in Sculpture Magazine. Upcoming exhibitions include “Paper” at Andrew Shire Gallery, Los Angeles, and “CONstruct/conSTRUCT” at Schiltkamp Gallery, Clark University, Wooster, MA in fall 2013.

Carol Salmanson is a Brooklyn-based artist working with light and reflective materials. Her most recent solo exhibition was at Storefront Bushwick Gallery in Brooklyn in 2012, and her next solo show will be held this fall at the Visual Arts Center of New Jersey.  In January of 2014 she will have a window installation at 223 West 10th St. for Time Equities' Art in Buildings program.  Park Lightsfeatured two installations in the windows of 254 Park Ave South in NYC in 2011.  Other solo exhibition venues include a window exhibition at Mixed Greens Gallery, Dam Stuhltrager Gallery, Saint Peter's Church, and PS 122 Gallery in New York City, and Gallery Ju-ichi Gatsu in Tokyo. Her installation "All That's Left" was included in San Antonio's "Luminaria" festival this past March.  Salmanson has also participated in numerous group exhibitions, including Space Invaders, curated by Karin Bravinat Lehman College (2102); "Rock St" curated by Deborah Brown and Lesley Heller (2013); "Illuminators" at OK Harris (2013); Station Independent's "Summer Break (2013);”Dumbo Arts Festival (2010); Resplendency in Berlin (2010); Incandescent, 532 Gallery Thomas Jaeckel, New York City (2008), and Host at the Soap Factory, Minneapolis (2007).