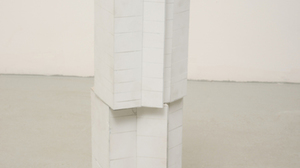 Lesley Heller Workspace is pleased to present new work by Ted Larsen. Informed by Euclidian geometry, Abstract Expressionist painting, and epistemological studies, Larsen’s work dwells between the abstract and reductive. Working with alternative and salvaged materials, his sculpture explores the formal relationships between the part and the whole. By working with materials which have a previous history, Larsen is interested in subverting that specific history and crossbreeding it with another history: that of aesthetic reduction and restrictiveness.

Larsen investigates the effect of the serialized, multiple component object by addressing the minimal canon and reversing it, whereby the individual pieces are lost in the whole of the object. The compounding effects of multiple segments create an entirely different resolution. His work has the potential to question the nature of hierarchical order, where no one elementis given primacy over another.

Rather than adhering to one specific theme or agenda, Larsen evades logic within his practice and does not attempt to illustrate a specific idea. Each work in the installation offers the possibility to become something akin to a new letter, word, or phrase. The processes used to construct the work vary in technique, from precise welding to twisted annealed wire, to riveted systems, and in some cases plywood substructures are used. The wide variety of materials and techniques keeps Larsen’s hand and eye fresh and open. There is an inherent playfulness in the work, breaking away from the high art theories where his work has its foundation.

While drawing from Minimalism, Larsen builds his practice on the low art of the handcrafted with influences from outsider art. It is in this boundary that he finds the sense of provisionality, restrictiveness, and architecture in which he builds a body of work: a  place where logic begins to fray.

Ted Larsen (b. 1964)  lives and works in Santa Fe, NM. His work has been exhibited widely in museums in the US, including the New Mexico Museum of Art in Santa Fe, The Albuquerque Museum, The Amarillo Museum of Art, The Spiva Center for the Arts in Joplin, Missouri, and the Philadelphia Museum of Art as well as in over eighty gallery exhibitions. He has received grants from the Surdna Foundation and the Pollock Krasner Foundation, as well as residencies with the Edward F. Albee Foundation and Asilah Arts Festival in Morocco, where he was the selected USA representative.

Larsen has been featured in Art in American, ArtNews, SouthWest Art, Mountain Living, Architectural Digest, Sculpture Magazine, and Art Gallery International magazines. He has had reviews in The New York Times, The Philadelphia Inquirer, The Denver Post, and The Dallas Morning News amongst others. Larsen's work appears in the books Art On The Edge, Biennial Southwest, The Curtain of Trees, New American Paintings, and Millennium Collection.  Public Broadcasting Service (PBS) produced an interview with Larsen.