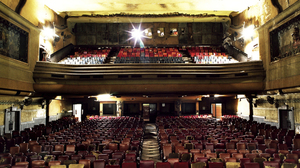 Gallery 1 : For the past nine years, Newbegin has photographed vacant spaces of leisure, travel and transitional occupancy. All of the spaces she photographs are deeply informed by traces of the human activities that take place in them, but only remain in the evidence left behind.  The architecture of these hotel rooms and movie cinemas, hold a stifling sense of deadness, as if they were already a museum, acting as a conduit into a displaced time.

Newbegin tracked down numerous gigantic Soviet-era hotels that have since become obsolete relics.  These monuments to tourism were built by the government for nation building purposes and were often used as a reward for the best workers of the Soviet Union.

“What initially brought me to former communist locations was a fascination with what it might have felt like to be behind the curtain, to live and exist in a place that seemed like a secret.”

Newbegin photographs with film on a Pentax 6 x 7 medium format camera and uses only natural lighting, which gives her photographs an ethereal glow.  By leaving her camera lens open for minutes at a time,  she is able to capture the remnants of human existence in extraordinary detail. Her photographs have a painterly quality due to her sense of color and compositional intelligence.  In these once treasured rooms, in these empty worlds, a patina is left from before a shifting occurred in the culture.

Katherine Newbegin (b.1976) lives and works in Brooklyn, she received her MFA from Hunter college and her BA from Yale. She was awarded a DAAD Fellowship to live in Berlin and a Tiffany Grant, which allowed her to travel to India to photograph cinemas.  She was awarded residencies from the Marie Walsh Sharpe Foundation, Yaddo, the Camera Club of New York, and the Catskills Mountain Foundation.

Newbegin has shown her work widely in both Europe and the US, including: Dina4Projekte, Haas & Fischer Gallery, Galerie Open, Pinakothek der Moderne, Kunstverein Munich, KommunaleGalerie Berlin, the Loeb Art Center at Vassar College, Deutsches Haus, and the Chelsea Art Museum.

Newbegin has published two catalogues, one with Revolver in Germany, and the second with the Loeb Art Center at Vassar College. Her work has been featured in Berlin Zitty, Time Out New York, Lettre International, Camera Austria, Neues Deustchland, ParisBerlin, Zuricher Zeitung, Die Welt, and the Berliner Morgenpost. She currently teaches photography and video at SVA and Pratt.