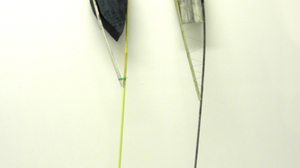 Gallery 1: Lesley Heller Workspace is pleased to present the first New York solo exhibition of Polish-Dutch artist Monika Zarzeczna.  Zarzeczna is fascinated by the reverence we assign to mundane objects: how we perceive value or create meaning by collecting, tying together, or arranging things.  Her paper sculptures reflect impressions of her daily encounters with the discarded and devalued debris in her Brooklyn neighborhood.This exhibition features several bodies of work including collages and sculptures from herTrophy, Landscape, Stool Idol, andSouvenir Series.

At first glance Zarzeczna’s sculptures convey a substantial heaviness, but upon further examination, the ethereal nature of the materials and the process used for their construction unfold.  Her shapes resemble human appendages and fragments of the broken toys, car parts, and other debris she sees around her.  These forms contain an enigmatic quality; this ambiguity becomes a part of the sculpture’s identity.  Zarzeczna usespapier mâché as part of her process. The final layer is often painted rice paper, allowing her to carefully control the color and texture of the piece. This creates the impression of a residual stain or chipped paint, reminiscent of the surfaces of discarded objects. In some instances she decoupages wooden strips, adding another layer of ornamentation and dimension to the work.

By elevating her large paper sculptures on furniture or stools, or by tying seemingly useless objects together, Zarzeczna indicates the value she gives the discarded. Each piece of paper, furniture or string has its own past, which  when combined with her use of color, texture, and shape, bring a sense of poetic history and meaning to the work.

Zarzezcna’s collages use salvaged paper to construct a landscape in space.  She works with the idea of something like a room, using vague architectural and spatial references as well as memories of color and light as a guideline. In Landscape Drawing 1, linear elements that are more common in drawings, are integrated with colored forms that she views as “fragments of a place”.  It is not important for Zarzeczna to make her feelings about these spaces known to the audience. She wants her sculptures and collages to slow the viewer down and spark a connection to their own reflections and memories.

Monika Zarzeczna was born in Warsaw, Poland and grew up in the Netherlands and moved to New York in 2002. She lives and works as an artist in Brooklyn. Her work has been shown in the Netherlands, Spain and the United States, in the Sculpture Center in LIC, NYC, David Castillo Gallery in Miami and the Spencer Brownstone Gallery in New York. She has enjoyed the Skowhegan Residency, was a resident artist at the WCC Center for the Arts and is a resident artist at the Chashama studio program. Monika Zarzeczna is part of the 2UP artist collective issuing posters that are or were on view at Printed Matter, MoMA Library, Bowery Poetry Club among other venues.