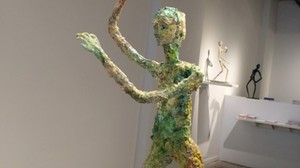 Lesley Heller Workspace is pleased to present Ming Fay’s third solo exhibition with the gallery entitled Figures. This exhibition features Fay’s latest series of mixed media sculptures inspired by Tai Chi Chuan postures. Often abbreviated as Tai Chi, it is practiced for both its health benefits and self-defense training. Tai Chi Chuan translates from the Chinese characters as the “Supreme Ultimate Force.” Fay’s figures reflect the concept that there is a dynamic duality in all things.  They are a static representation of a movement associated with this “force” as the way of achieving ying-yang, or balance.

Ming Fay has been studying Tai Chi for the past ten years.  His practice has slowly influenced his studio process and work. His new sculptures step away from plant and animal subjects and visit the figure in an enlightening way, providing a glimpse into the various poses and energy of Tai Chi. The figures are asexual and their postures represent both the inner body, and the outer body forms. Fay explains that his figures “articulate the correct outer form, or pose, where all the body parts are in the right places and the inner form, the body inside the outer shell where all of the energy is hidden.”

The sculptures are created by bending and shaping metal to create an armature, then adding layers of foam, paper pulp and paint. The layers are then shaped by adding and taking away the paper pulp until Fay is pleased with the final pose.  Through this process, Fay strives to represent the duality of the Ying Yang form - as the viewer sees it, and as the sculpture lives it.

Ming Fay's work has been exhibited extensively in the US and abroad. He has also received many public art commissions. To date he has had 30 solo exhibitions and over 200 group exhibitions. His most recent solo exhibition was a one person show at Grounds for Sculpture, Hamilton, NJ. He received his BFA in sculpture from Kansas City Art Institute and his MFA from University of California, Santa  Barbara. He lives and works in New York City.