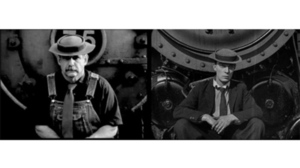 Lesley Heller Workspace opens the fall season with Israeli video artist Tom Pnini.  This is his first solo exhibition with the gallery. Pnini’s work references silent movies, the natural world, and art history- particularly the study of light and time found in impressionistic paintings. The exhibition will debut his multi-channel video installation, Ballade to the Double as well as a short film, Double Windsor, and collages - all stemming from his fascination with early stereoscopic photography. Stereoscopy, developed in the late 1800’s, places two almost identical images side by side. When the images are viewed through a stereo viewer, they combine into one, creating the illusion of depth.If photography looks to a singular decisive moment, what happens when you have two decisive moments? His inspiration for this exhibition was the exploration of  “that split second, that breath of air” between the double images.

Ballade to the Double was filmed over a one-year period on the 35 miles of train tracks of the New England Railroad Museum in Connecticut. Each screen depicts the same train journey during a different season of the year, allowing the viewer to experience the passage of time. In each projection, the train stops several times along the ride due to an unforeseen interruption: a girl standing in the middle of the train tracks, always in the same location. Her actions trigger a sequence of events that create linear acts across the four seasons. We witness her playing with an antique toy locomotive, placing coins on the track or playing lonely tunes on folk instruments. The toy train reappears in different seasons and the coins are left to deteriorate over the course of the year. These interludes repeat across the four channels simultaneously, appearing as duplicates of themselves like the stereoscopic images of trains that inspired this project.

Pnini’s interest in exploring stereoscopic technology is further evident in his collages. He slightly alters antique stereoscopic photographs that document the construction of the Central Pacific Railroad in Nevada.

Also on view is Double Windsor, a split screen projection, which recalls a specific moment in Buster Keaton’s, The Goat (1921). While the original scene plays on one side, the recreation starring Howard Pincus, the chairman of the station of the New England Railroad Museum,can be seen on the other.

In Ballade to the Double, Double Windsor and his collages, Pnini explores and formalizes the idea of the double and the two decisive moments in stereoscopic imagery. “They are like identical twins: the resemblance between them is strong, but the observer is looking for what distinguishes them from each other.” TP