Through the Valley: New Paintings by Devin Powers 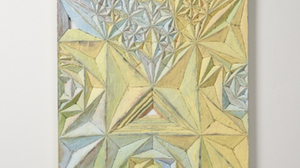 Gallery 1: Lesley Heller Workspace presents, Through the Valley: New Paintings by Devin Powers. Powers continues his exploration of the borderlands between  geometry and gesture, creating paintings that overflow with energy and urgency.

As in his previous work, Powers employs his mastery of intricate geometric and curvilinear form while also allowing the liquid vagaries of paint to interrupt the precision of these forms. For this exhibition, he incorporates an additional material that resists perfection: carved wood. Starting with a schematic drawing on a thick panel, Powers chisels the surface away, creating a honey-combed lattice of faceted concavities, while also altering the outer dimensions of the panel to create a shaped image. At times, the carving goes all the way through the wood, creating jagged holes in the fractured surface.

As Powers carves, he paints, allowing the colors of the piece to evolve in tandem with the forms. Color is scraped away to emphasize the intersection of planes, and to reveal darker, grittier notes beneath the upbeat, prismatic hues of the surface. The kaleidoscopic, push-pulling palette reinforces the lines and planes of the carving, but at times also subverts it, such that the eyes get lost in a tangle of real and implied depths. Patterns shift, break apart, and reconstitute in a symphonic, roiling mass that beguiles the eye.

The title for this exhibition comes from a poem by Jean Valentine, in which a wandering hunter or shaman, saddled with a heavy deer carcass, is turned away from the doors of her fellow humans and asks: “door in the mountain / let me in.” The poem conflates spiritual transcendence with raw physicality, a tension fundamental to Powers' paintings. In addition to obvious reference points in the Western tradition, Powers' work calls to mind a host of spiritually-oriented art and craft practices throughout the world, and throughout time: Gothic architecture, Islamic tile and plasterwork, Insular manuscript illumination, outsider art of the American South, mask carving of Papa New Guinea, etc. In each of these traditions, geometry attains spiritual charge through its imperfect embodiment, through the sense of fallible human hands striving to create sublime form. Though he has no specific spiritual agenda, Powers follows this recipe with all the intensity of a true believer.

Door in the Mountain

deer legs hanging in front of me
heavy on my chest

People are not wanting
to let me in

Door in the mountain
let me in

Devin Powers received a BA in Studio Art from Bennington College in 2005 and an MFA in 2009 from Brooklyn College. Powers lives and works in New York. This will be his second solo exhibition at Lesley Heller Workspace.