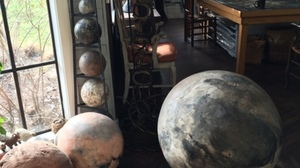 Lesley Heller Workspace is pleased to present the survey of Grace Knowlton. The exhibition includes her work in photography, sculpture, drawing, and painting - highlighting her extensive oeuvre from the beginning of her career in 1975 to the present.

Knowlton began her career as a painter in the 1960’s after studying with Kenneth Noland, but turned away from painting finding her mature voice while working with ceramics. “I got so interested in closing the pots, in making a secret space closed off forever- that it caught me and I never went back.” In the 1970’s, she began making  spherical sculptures constructed in a variety of materials including bronze, stainless steel, iron, plaster, copper, and clay. The early spheres were essentially paintings in the round, their surfaces painted with bold calligraphic strokes. When placed outside, the exterior of the spheres weather and crack marking the passing of time, which becomes part of the work.  Indoors, the spheres take more geological or astrological references, resembling model solar systems or children’s collections of river rocks.

“Lying close to each other as toppled by despoilers, these have a regal presence, suggesting dynastic remnants from the dawn of history.” Grace Glueck, New York Times.

Knowlton started exploring the visual possibilities inherent in piles of dirt in the early 1980’s. Several drawings and sculptures from this period are included in the exhibition. Anna Hammond wrote in an essay about the Dirt Piles“…she has tested the limits of this formless form by exploring every iteration possible…Like the sphere, it is a metaphor for the body, for the mind, for nature, for the self.”

In the mid 1980’s Knowlton painted the moldings, corners, and stairs of her house with white paint to erase the wood grain, creating a transcendent visual experience out ordinary reality which she documented in her “Corner” photographs. By using watercolor paper that had been sensitized with platinum and palladium salts, she was able to print the subtle tones of white and grey in this series. In 1984, she had the corners cast in bronze;  in 1990, Knowlton incorporated aluminum panels on a later version of the Corner series, adding another level of illumination.

In 2010 on a trip to Jackson Hole, Wyoming she found herself attracted to sawhorses.  To Knowlton, these structures became animated and seemed to develop character over time. She enhanced this animated quality by drawing on top of the initial photograph with pastels, altering the color, line, and shape and shadows of the image. She then re -photographed the altered image to produce the final print, skewing the connection between photograph, drawing, and reality. A similar process was also used  in her photographs of broken pieces of wicker and old chairs.

Knowlton’s unique methodology, How to Draw Wrong, published in 1990, favors feeling over technique, was used to make her Blind paintings- done in the early 2000’s and included in this exhibiton. To create this series she placed herself behind a roll of drawing paper suspended between two poles and, working from behind, unable to see what she was doing, painted, completely trusting her physical movement and intuition.

In Knowlton’s recent abstract drawings and paintings references to the figure re- emerge as in her Spheres so many years ago. In the early 2000’s Knowlton began actually shattering the spheres and putting them back, often with pieces missing and lines of glue appearing on the outside,  giving them a “broken and mended” quality- a metaphor for life according to Knowlton. Looking at such a broad range of work over such a long period of time, it becomes clear that the figure is one of her unconscious touchstones. “Drawing still feels like my voice; and my sculpture still feels like my body or self- but transformed - the self becoming alarmingly open, as the body becomes alarmingly battered.  My drawing- originally a magic shield- has become a gesture from within, intended, often playfully, to engage the viewer.”

Grace Knowlton (b. 1932, Buffalo, NY) received a BA from Smith College and an MA from Columbia. She has had more than thirty solo exhibitions and dozens of group exhibitions nationally and internationally. Her solo exhibitions include Hirschl & Adler Modern, the Neuberger Museum, John Davis Gallery M-13 Gallery, Bill Bace Gallery, Witkin Gallery, Twining Gallery, and Susan Harder Gallery, the Smith College Museum of Art in Northampton, the Center for Creative Photography in Tucson, and Gallery 291 in Atlanta.  Knowlton’s work is included in the Metropolitan Museum of Art, The Victoria and Albert Museum, Storm King Sculpture Park, The Brooklyn Museum, Houston Museum of Fine Arts, and Yale University among others.