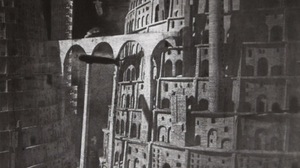 Lesley Heller Workspace is pleased to present Babel, the most recent photogravures of Lothar Osterburg. This will be his third exhibition with the gallery. For Babel, Osterburg constructed a creative interpretation of the ancient tower in his studio, which he then used to create different scenarios to shoot for theBabel photogravures.  With Babel, Osterburg is further developing his ideas from Yesterday’s Cities of Tomorrow, which celebrated the immigrant’s vision of New York as a city of endless possibilities. Osterburg combines the mediums of printmaking, photography, sculpture and video to achieve his final vision. Literature, history, personal and collective memories, as well as art historical references are the inspiration for this world.

To capture what is often initially a fleeting impression, Osterburg works quickly and intuitively, building or sculpting small scale models from memory with readily available, found materials. After staging a scene through the same intuitive process, he photographs with an extremely short focal range to simplify and soften the images. These composite images have been filtered and idealized through time, becoming progressively stripped of superfluous detail.

The 19th century photogravure process is an ideal medium for Osterburg to express his vision. Its rich velvety blacks and soft infinite gray values along with the soft focus, the scratches and traces left from the previous plate pressings in the photogravure process, and the use of rough and unfinished models, all work together to suspend the final image somewhere between the real and the imaginary.

Osterburg feels the Tower of Babel is a living organism like an ancient city, constantly changing, with a cumulative and visible architectural history. Older sections are landmarked, but skyscrapers sprout from newer or collapsed areas. In Osterburg’s atmospheric photogravures, Zeppelins hover near the tower in different light and weather conditions, and under close inspection reveal that Babel is covered with text in many languages-all pages from books found in the streets of New York City.

In the Babel series Osterburg asks, What if God interrupted the singular pursuit of building the tower and gave people different languages and scattered them across the world so that mankind could develop a multitude of languages, philosophies, and religions- reaching broader and farther in every way making the possibilities for achievement limitless.

Lothar Osterburg’s work is in the collections of the Metropolitan Museum of Art, The Library of Congress, The Art Institute of Chicago, The Fine Arts Museum in Houston, and The New York Public Library. A 2010 Guggenheim Fellowship recipient, he is currently Artist-in-Residence at Bard College. He has shown with Lesley Heller since 2009.