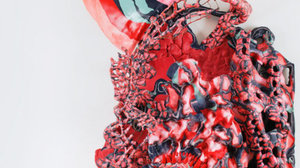 Front Gallery:Lesley Heller Workspace presents "Kooks and Villains," Daniel Wiener's third solo exhibition with the gallery. Though best known as an abstract sculptor, three years ago Wiener began drawing and modeling fantastic heads and faces. In this series Wiener asks, what is more powerful than looking at someone face to face?

Originally the project began as a way to re-imagine the politicalvillains of our time as grotesques, continuing the tradition of Philip Guston's "Poor Richard." In tinkering in the studio, Wiener began to focus on inner demons and so a variety of historical influences took root: Romanesque gargoyles, the hellish gods of Himalayan cloth paintings, the Rat Fink comics of Ed 'Big Daddy' Roth, and James Ensor's paintings of masked revelers confronting death. Far from traditional representation, these faces live on the edge of abstraction.

In opposition to a villain, typically a kook is slightly wacky, an endearing name for someone eccentric but lovable. But in the world of surfing, of which Wiener is an active member, "kook" is a negative and derogatory term—beginning surfers who naively get in the way. Despite their inconvenience in the water the artist has found himself increasingly drawn to the clumsy aspiration and dogged determination of the kook. In surf culture, no one would admit to being a kook. But kooks endure the pain and confusion of failing over and over again, as well as appearing the fool, not unlike an artist. In his work, Wiener emulates the kook's innocent enthusiasm.

We see figures and bodies in the clouds above; we recognize a face on the surface of the moon. Wiener’s work extends this notion, reducing the facial form of his kooks and villains to a series of abstractions, yet subtly preserving a thread of recognition. The artist pushes twisted strands of Apoxie-Sculpt, a two-part, clay-like epoxie, into hand-crafted molds, reproducing shapes without creating copies, a great variety generated from the same starting point. Exploiting the attributes of Apoxie-Sculpt, the artist paints in three-dimensional space where heads appear like chimera in and behind the nooks and crannies of the larger works.

Wiener's kooks and villains are as beautiful as they are monstrous. Like any mask, they expose and obscure emotion, often at the very same time.

Daniel Wiener, who recently received a Guggenheim Fellowship, grew up in Los Angeles County but has lived in or around NYC for close to thirty years. A professional artist since 1977, Daniel’s first show was at the Stephen Wirtz gallery in San Francisco, held shortly after his graduation from University of California at Berkeley. In 1982 Daniel was awarded a fellowship for an unusually long stay at Yaddo, which inspired his exodus to the East Coast. Daniel’s work has been exhibited nationally and internationally in both group and one-person shows, notably at Bravin/Post Lee Gallery in New York and Acme Gallery in LA. Though he is known primarily for his intense and viscerally arresting sculptures, Daniel also works in pen and ink, watercolors, and animation.