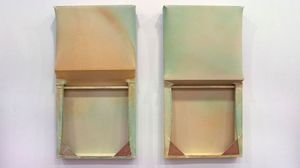 Workspace:The three artists of In This Light share many unique and authentic sensitivities, along with a desire to communicate the ineffable. Each of these artists achieve this aim with particular sensitivity and human relationship to the physicality of their materials, as well as a profound sensitivity to the phenomenological properties of light. Employing available light, their physically dense, and potentially cumbersome constructions appear to float, defying their own substantial presence, taking up residence in the realm of the sublime.

Each steeped in the language and history of painting, these artists make use of nontraditional methodology with media and forms, while confounding and challenging traditional definitions of 2D, 3D, painting and sculpture. They utilize the physicality of their carefully chosen materials to the fullest, yet restrain the resultant imagery to its most essential.

The inherent properties of many of the pieces shown here allow for the viewers perception of the work to transform along with the source of ambient light, either by its changing direction or by a change in the light’s intensity. Light acts as a catalyst, generating the movement of the shadows being cast and reflections being projected, giving a kinetic aspect to each of these individual works and hinting at the passage of time. In this light, these works brush up against the metaphysical and philosophical, while dancing with the phenomenological.

Stuart Arends: “My pieces all come out of and deal with the traditional painting issues of
color, light (implied vs. actual), scale, illusional vs. "real" space, and paintings as objects,
etc. The Stormy Monday series utilize real space by using a translucent plastic box that is
painted on both the outside and inside. So rather than using paint to arrive at traditional
"picture space", the Stormy Monday series approach traditional painting concerns in real
space.” -Stuart Arends, March 2013


Stuart Arends (born 1950, Waterloo, Iowa) graduated in 1981 from the MFA program at
the Otis Art Institute, Los Angeles. His work has been exhibited widely throughout the U.S.
and Europe and is included in the collections of the Whitney Museum of American Art, New
York, NY; the Corcoran Gallery of Art, Washington, D.C.; the Villa Panza, Varese, Italy; the
Albright-Knox Art Gallery, Buffalo, NY; and The New Mexico Museum of Art, Santa Fe, NM.


Heather Hutchison: “Hutchison’s paintings are impossible to experience through
reproductions. No matter how skilled the photographer, they cannot be captured in a fixed
moment. The work is responsive in a way alien to traditional painting; as the light shifts so
does the hue. These paintings demand an active perception and in the process, they make
transparent the act of looking.” -Cindy Moore, NY Arts Magazine


Heather Hutchison (born 1964, Philomath, OR) is the recipient of a 2012 Pollock Krasner
Grant and a 2011 Adolph and Esther Gottlieb Foundation Individual Artist Grant. Her work
has been exhibited in the Corcoran Biennial in Washington, D.C., at the Brooklyn Museum,
the Otis College of Art and Design, in Los Angeles, the Knoxville Museum of Art, and the
Montclair Art Museum, in Montclair, NJ. Select public collections housing her work include
The Hammer Museum, Los Angeles, The Brooklyn Museum, Brooklyn, NY, The Smithsonian,
Washington, D.C., Art in Embassies, Beijing, China, and the Gerald Schwartz Collection at
Harvard University, Boston, MA.


Maria Walker: The canvas of Untitled (Reverse) is cut to create flaps, some attached to
what looks like the front of the frame and some pulled around to the back. “There is not a
hierarchy of either side,” says Maria Walker, a Brooklyn-based artist who views paintings as
three- dimensional objects rather than surface images. Her goal: to create sculptures out of
the raw materials. She twists and manipulates the canvas, often opting for unconventional
frame shapes and, in this case, applying primer sparingly so that the paint seeps into the
canvas. While many of Walker’s pieces stand upright or protrude from walls, giving gallery
visitors a fuller view, Untitled (Reverse) hangs flat, hiding one half. This “creates a tension,”
says Walker, making the viewer wonder, “What’s on the other side?” -Kirstin Fawcett,
Smithsonian Magazine


Maria Walker (born 1980, Philadelphia, PA) received her MFA in Painting from Tyler School
of Art and her BA in Visual Art from Brown University, where she also completed a Capstone
Project in Poetry. She attended the Skowhegan School for Painting and Sculpture in 2011,
and received an Individual Grant from the Belle Foundation for Cultural Development in
2013. Walker’s work has been published in the Smithsonian Magazine and reviewed as a
Critic’s Pick on Artforum.com, as well as in the Brooklyn Rail, New American Paintings,
Beautiful Decay, and Two Coats of Paint.