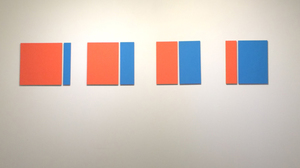 Front Gallery: Lesley Heller Workspace presents, Slave to the Rhythm, the recent work of Tom Kotik.  This exhibition is a continuation of Kotik’s past explorations into methods of visualizing sound.  Much like the staff register in sheet music, there is a reductionist format Kotik uses to compose forms and colors on the wall. The human brain is trained to respond to rhythm sonically; less noticed is the effect rhythm has on our other senses. For example; a tennis player timing the perfect shot, or the rhythmic power of an author when reading aloud. Kotik recognizes the profound effect that rhythm has on our daily lives, and how we respond to it, whether it beThe Monkeys, Mozart, or drilling in the street.

Tom Kotik began making sound pieces in 2004 while working on his graduate sculpture thesis at Hunter College. A longtime musician and member of the rock band, Sportsman’s Paradise, Kotik had kept his musical endeavors separate from his art work until the inspiration came to him to combine the two threads of his creative life. The format of his new work attempts to use rhythm in context to the situation within each piece.

The sculptures aren't necessarily specific songs or musical compositions, but mediations on harmony between the forms depicted in each rhythmic space. For each sculpture, Kotik wasthinking of a bass line with one steady note and beat underneath the melody floating over, and engaging the bass line. Kotik’s work reminds us that rhythm is the secret to many of the things wedo and experience daily. The show's title is inspired by the 1985 single by Grace Jones.

Tom Kotik is an artist, musician and curator.   In 2015, Kotik was in included in group shows at Brooklyn Fireproof, Art Helix and Whitebox Art Center.  In 2014 he received a grant to work in Prague at Meet Factory for three months, culminating in a solo installation at Kostka Gallery entitled (Re) vision.  2014 also saw the release of his band's debut album, Welcome to Paradise (sportsmansparadise.bandcamp.com).  Kotik is also a curator with Arts Brookfield and is currently preparing three exhibiitons for the upcoming fall season; a 6 person group show of female artists, and solo installations by Josh Dorman and David Baskin.