barely there, curated by Pamela Matsuda-Dunn 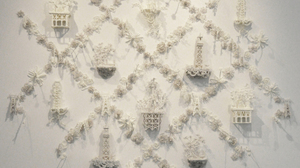 Workspace: Barely There, curated by Pamela Matsuda-Dunn, brings together a group of contemporary artists whose work emphasizes discovery through installations that invite close looking. There is the surprise of the initial view – followed by a careful closing in on each piece. Their work is interwoven and sometimes embedded into the physical features of the exhibition space. Each of these artists’ work explores the theme of the exhibition in different ways – through textural changes, by filling space or simply defining it, by playing with shadow and light, or sometimes by challenging you to find it and then engage in the tiny universe it creates by having drawn you into its orbit. Echoing the wry and elegant spatial interventions of Richard Tuttle or Fred Sandback yet invoking a host of personal references, Barely There addresses themes of presence and absence, place and presentation. Each artist has established working methods that resonate strongly with these themes.

The linear abstractions of Jong Oh proposes paradoxes in the viewer’s experience, while Susan Graham’s white-on-white sugar and porcelain sculptures and the dusky transparency of Naoko Ito’s wire piece read like memory shadows. The viewer may well walk past James Sheehan’s work, but once they spy these tiny paintings, under an inch in any dimension, the work asks the viewer to draw near – very near. Jonathan Rider’s work is also miniscule in its individual components, but the accumulation is greater than its parts, inviting the viewer to follow its path. These artists entrance, seduce, and challenge the viewer to consider an aesthetic experience in which the work subtly, but fully alters the environment it inhabits.

SUSAN GRAHAM attended the School of Visual Arts and has had solo shows at the Lux Art Institute in California; Schroeder Romero, Mixed Greens, and Holly Solomon in New York City; and Photology Gallery in Milan. She has been in numerous group shows in galleries and museums, including the Neuberger Museum of Art, Yonkers, NY; and the Musée International des Arts Modestes, Sete, France; and the Tucson Museum of Art in Arizona. He work is on permanent display at the Johns Hopkins Hospital and she is in the collection of the Hessel Art Museum, Bard College, as well as numerous private collections. Graham has been the recipient of several fellowships and grants from organizations such as the Pollock-Krasner Foundation and the New York Foundation for the Arts. She lives and works in New York City.

NAOKO ITO has an MFA from the School of Visual Arts in New York and has had solo exhibitions at CAM Raleigh in NC and Soho20 Chelsea Gallery in NY. Her work has been shown in New York at Wave Hill in The Second AIM Biennial, Cuchifritos, Perry Rubenstein Gallery and White Box, among others, as well as internationally in Bern, Switzerland at Zentrum Paul Klee. Naoko is the recipient of a Foundation Fellowship from The Helene Wurlitzer Foundation of New Mexico and had a residency at Yaddo. She currently lives and works in New York City.

JONG OH was born in Mauritania and spent his childhood in Spain and Korea. He received a BFA in Sculpture from Hongik University in Seoul, Korea and an MFA at the School of Visual Arts in New York in 2011. Jong has had solo gallery shows in New York, Germany, and Mexico. His work has been included in numerous international exhibitions in Germany, Mexico, Istanbul, Korea, and throughout the United States. He is represented by Marc Straus Gallery in New York City.

JONATHAN RIDER is an artist living and working in New York, NY. Rider received a BA from Pennsylvania State University, University Park, PA, in 2005, and a MFA from the School of Visual Arts, New York, NY in 2011.  His work has been shown recent exhibitions, including A Palace with a View, The Pool NYC, Venice, Italy (2015); you know it when you feel it, curated by Kim Charles Kay, Art in General, New York, NY (2014); Feelin’ the Dream, Era VI VII VI, Brooklyn, NY (2014); and Drawing Up!, Josée Bienvenu Gallery, New York, NY (2013), among others. Rider is the Assistant Director of The FLAG Art Foundation, a nonprofit contemporary art space located in Chelsea.

JAMES SHEEHAN has had solo shows in New York, Zurich, and Montreal, in addition to numerous group exhibitions, both in the United States and abroad (Tokyo, Munich, Prague, and Moscow). The recipient of a NYFA award and Pollock-Krasner Grant, he has had residencies at the Marie Walsh Sharpe Foundation and LMCC’s second-to-the-last year at the World Trade Center. He lives and works in New York City. His tiny painting, Death of Malevich, is currently up at The Drawing Center (through October 2015).

PAMELA MATSUDA-DUNN was raised in Hawaii and educated at Reed College and the Pacific Northwest College of Art in Portland, Oregon. Her work has been shown at Lesley Heller Workspace, Central Booking, Center for Book Arts, and PS 122 in New York City; at the Compound Gallery in Oakland, CA; and the Kohler Arts Center in Sheboygan, WI; as well as other galleries and university spaces in New York and throughout the US. She is the recipient of a Sugarman Foundation grant and was one of the first Swing Space artists sponsored by the Lower Manhattan Cultural Council’s program. She was part of The Last Book, a project curated by Luis Camnitzer, which was exhibited internationally. Matsuda-Dunn is also part of the art collective, Field Trip, which has done their performance-installations at Momenta Art Gallery in Bushwick, in a decommissioned firehouse for Northside Town Hall Community and Cultural Center in Williamsburg, and at Project for Empty Space’s Etiquette for Lucid Dreaming at Gateway II in Newark, NJ. She currently lives and works in New York City and has work in an upcoming summer show at Governor’s Island, Speaking Volumes … and Voids.