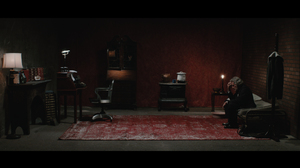 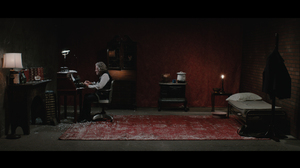 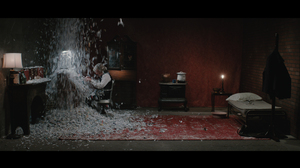 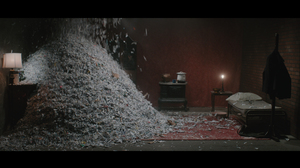 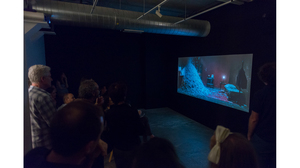 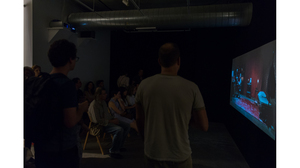 Lesley Heller Workspace presents the video premier of Paperweight by Tom Pnini, the artist’s second solo presentation with the gallery.

Pnini’s work references silent movies, art history, and the natural world. He often employs a play within a play in his work and is known for his multi-layered narratives. Paperweight, his latest video work, depicts a late-career writer alone at work in his room. The 09:13 minute film explores the tropes of an older artist as he sits down at his typewriter to presumably write one final masterpiece. As he types—and battles the demons of the creative process—shredded paper begins to fall from above. Quickly increasing in volume, the paper soon completely engulfs both the writer and his workspace. The film ends with the writer consumed by the mountain of paper, referencing perhaps an artist’s life’s work and the many struggles that occur on the road to success.

Paperweight was filmed in a single-shot/one-take process inside one of the largest recycling facilities in Brooklyn. The fixed frame no–movement shot emphasizes the film’s relationship to theatre and the “frame story”—that of the older artist winding down his career—extends into the play within a play: Pnini’s own relationship with his father—an Israeli theatre actor—who is cast in the role of the writer.

Pnini explores the father/son artist relationship, himself being at the prime in his career as his father nears the end of his, and challenges him on two levels: will the actor successfully accomplishing the complexity of this single-shot piece thus affirming his talent, and will the father accept his son’s success in the midst of his own waning.   These two stories set a stage for Pnini to explore the many complexities of the artist alone, at work in the night.

Beware of those whose pockets are full of esprit–of wit–and who scatter this wit at every opportunity, everywhere. They have no demon within them, they are not gloomy, or somber, or melancholy or silent. They are never either awkward or foolish. The lark, the chaffinch, the linnet, the canary, they chirp and twitter all the livelong day, at sunset they fold their head under their wing, and lo! they are asleep. It is then that genius takes his lamp and lights in. and this dark, solitary, savage bird, this untamable creature, with its gloomy melancholy plumage, opens its throat and begins its song, makes the groves resound and breaks the silence and the darkness of the night. [1]

Tom Pnini (b. 1981, Israel) creates time-based works and large-scale installations. He has exhibited in museums and galleries in New York, Los Angeles, Milan, Toronto, Moscow, and Israel, including 2015 solo shows at Chelouche Gallery, Tel Aviv and Giuseppe Pero Gallery, Milan; 2014 solo show at Lesley Heller Workspace, New York; and group exhibitions at The Center for Contemporary Art, Tel Aviv; The Israel Museum, Jerusalem; Il Museo Laboratorio d'Arte Contemporanea, Rome; and the Queens Museum of Art, NY. He holds a BED from Hamidrasha College (2008) and an MFA from Parsons School of Design at the New School (2010). He has received a CCA Video Art Fund (2012), a Dean’s Graduate Scholarship from Parsons (2009-10), and an Outstanding Artistic Excellence Award from Beit Berl College (2008). His work is part of numerous collections. Tom Pnini lives and works in New York City.