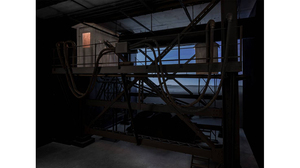 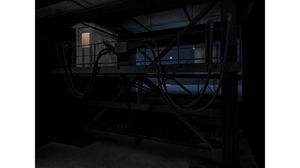 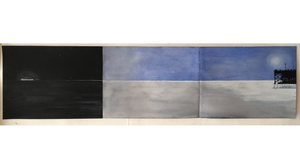 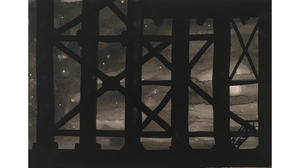 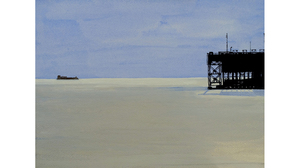 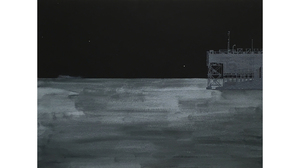 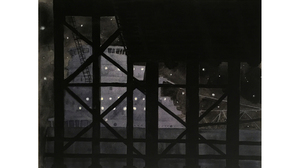 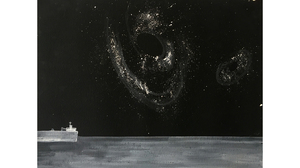 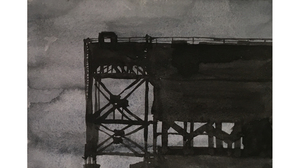 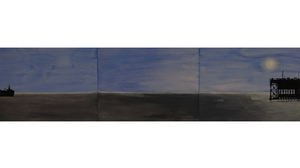 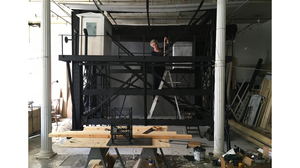 Lesley Heller Gallery is proud to present a solo exhibition by Donna Dennis featuring a new sculptural installation and related gouache paintings on paper. Dennis is widely renowned for her large, complex architectural sculptures which incorporate sound and light. Ship and Dock/Nights and Days or The Gazer marks the first time Dennis has incorporated video projection into her work. It is also the first time she has married her three-dimensional installation work with her two-dimensional works on paper. Dennis’ gouache paintings, which are displayed in a gallery adjacent to the installation, serve as inspiration for the sculpture and are incorporated into the projected video.

In the darkened back gallery, viewers will enter a night sky and find themselves looking up at what appears to be part of a giant ore dock, a familiar sight on Lake Superior. Perched within the structure of columns, beams, ramps and stairways, sit two small houses. One house faces the viewer and the other faces away. This house, “The Gazer”, looks toward a view of water, ship and sky and watches as starry night changes to dawn and back to night.

Dennis is one of a small group of groundbreaking women-including Alice Aycock, Jackie Ferrara and Mary Miss—who pushed sculpture toward the domain of architecture in the early 1970s. Deborah Everett writes in Sculpture Magazine “When Donna Dennis created her earnest, plain-spoken Tourist Cabins at the outset of her career, they had the impact of cultural icons.” Drawing from overlooked fragments of rural and urban vernacular American architecture, her sculptures— tourist cabins, hotels, subway stations, roller coasters—have represented stopping places on the journey through life.

Ship and Dock/Nights and Days or The Gazer continues the theme. With its two perched houses and a sky that changes from dawn to star-filled night, it is about time, the transformation of energy, the final journey and our collective journey into the unknown.

Donna Dennis was born in 1942 in Ohio and grew up outside of New York .She is best known for her complex sculptural installations with sound. BLUE BRIDGE/red shift, a 24-foot long evocation of railway drawbridges was exhibited at SculptureCenter in NY in 1993 and her subway-inspired Deep Station filled the lobby of the Brooklyn Museum in 1987. In 2007, the outdoor sculptures Tourist Cabins on Park Avenue, were exhibited on Park Avenue, NYC. In 2013, Coney Night Maze, a complex mixed media installation with sound that drew inspiration from the maze of layered fences, gates, ramps and barriers that nestled beneath the Cyclone roller coaster, was seen at the Neuberger Museum. Her work is included in Phaidon Press’ Sculpture Today, which overviews sculpture worldwide during the past 50 years. In 2004, her work was seen in Architecture & Arts 1900–2004, at the Palazzo Ducale in Genoa, Italy, curated by Germano Celant. A frequent collaborator, Dennis has worked with poets Anne Waldman, Kenward Elmslie, Daniel Wolff and Ted Berrigan and with performance artist/puppeteer Dan Hurlin. National Endowment for the Arts Jazz Master Carla Bley wrote Roller Coaster for the opening of Coney Night Maze.

Dennis’s work is in prominent collections including the Brooklyn Museum, the Cleveland Art Museum, the Microsoft Collection, the Walker Art Center, Ludwig Forum für Internationale Kunst in Aachen, Germany, the Indianapolis Museum, the San Diego Museum of Art, the Smithsonian American Art Museum, the Neuberger Museum, and the Martin Z. Margulies Collection. Permanent public art commissions are located at John F. Kennedy Airport, P.S. 234, in Tribeca, Queens College, and at the Wonderland MBTA Station in Boston. Grants and awards include a Guggenheim Fellowship, several National Endowment Fellowships, and Pollock-Krasner Foundation grants. In recent years she received the prestigious Artists’ Legacy Foundation Award, the Merit Award in Sculpture from the American Academy of Arts and Letters and the Anonymous Was a Woman Award. She was elected to the National Academy in 2010 and is Professor Emerita at Purchase College, SUNY. She lives and works in New York City.