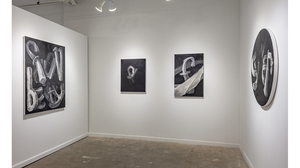 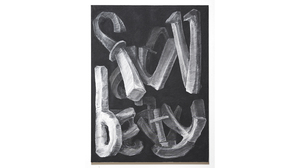 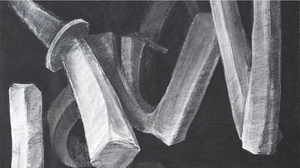 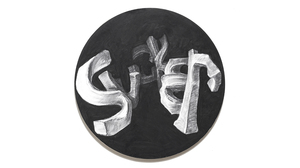 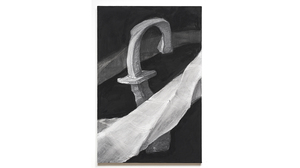 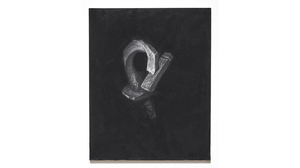 “If you set pen to paper, is the letter “i” a written sound sign or a drawn glyph of a standing figure? When you look at a narrative drawing and understand the story, have you not just read the drawing?”

Lesley Heller Gallery is pleased to present the first New York solo show of JF Lynch in our Project Space. Lynch is an artist known for his monochromatic works that feature abstracted letters and words set within a dark expanse. Working predominantly with charcoal on paper or canvas, Lynch’s work bridges painting, drawing, and writing.

This exhibition presents a selection of charcoal-on-canvas drawings that depict a theatrical and dramatic—almost three-dimensional—space in which letters float; turning and engaging with each other to form hidden and jumbled words. To achieve this result, Lynch first constructed a physical three-dimensional alphabet that could be legible from many different angles to stage a “still life” from which to work. This allows for his subject words to remain as legible as he wants from many different angles. The words depicted are often short and meditative. Lynch speaks of using a limited palette of letter forms, often focusing on short words such as if – of – is.

The use of charcoal as his primary material is an aesthetic and tactile choice, but also stems from an interest in the origins of drawing; the use of charcoal for example in the 17,000-year-old murals of the Lascaux caves in France.

Particular to this exhibition are the words: if, of, beautiful, real, and sucker; with each piece approaching the word in a slightly different manner. Untitled (sucker)—the only circular piece in the show—is perhaps the most straightforward, read in a linear manner from left to right. The other works are progressively less obvious, culminating with Beautiful (full of beauty) which is the most disorderly and abstract.

Lynch states that words “are the mortar in the construction of our understanding.” He is interested in how the relationship of the letters in his artworks affects the way each word is perceived, how writing can exist as drawing, and how drawings communicate ideas.

JF Lynch (b. 1980, Boston, MA) received his MFA with distinction from Pratt Institute (2011) and BFA from the Art Institute of Boston (2002). Lynch’s work has been included in numerous exhibitions including at Martin Gallery at Muhlenberg College, PA; Sarah Lawrence College, NY; Radiator Gallery, NY; Lesley Heller Workspace, NY; and Lyons Wier Project Space, NY. He has been featured in several “Best of Bushwick” lists including the Artnetguide to Bushwick Open Studios (2014) and Arts in Bushwick’s compendium: Making History 10 years of Arts in Bushwick. He was formerly a curator for Botanic Gallery, Brooklyn, NY; the visual arts editor for Apt Literary Journal, and is a contributor to the art blog Paintingisdead. Lynch has given lectures and presentations at several colleges and institutions in the tri-state area including Sarah Lawrence College, Pratt Institute, and Muhlenberg College. JF Lynch lives and works in Brooklyn, NY.