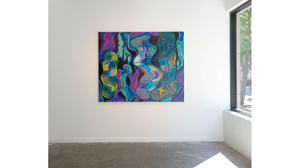 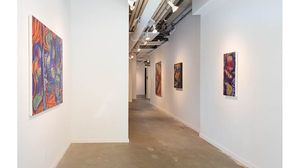 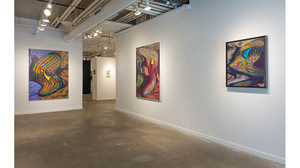 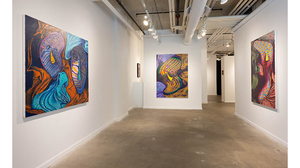 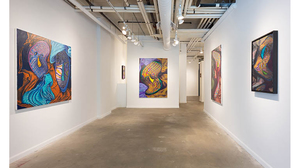 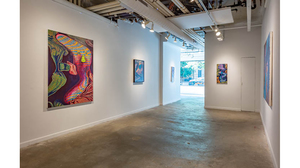 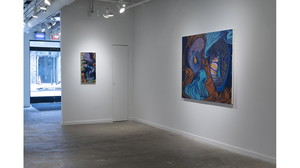 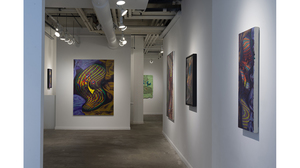 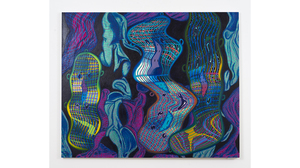 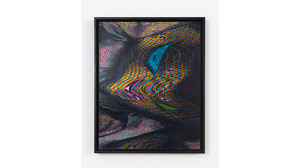 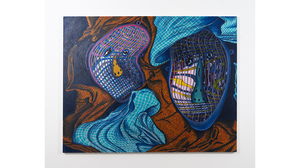 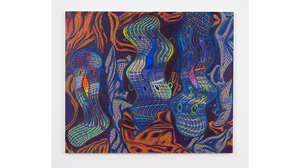 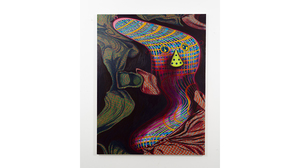 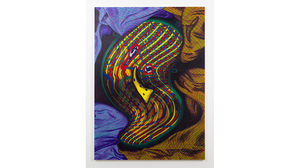 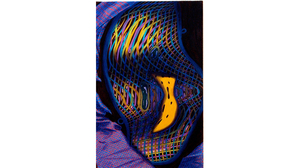 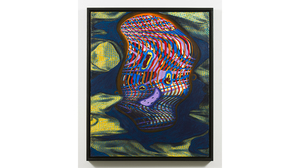 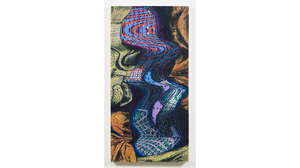 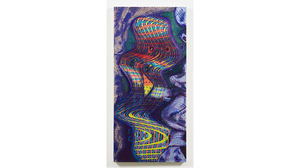 Lesley Heller is pleased to present Topsy-Turvy, a solo exhibition of paintings by New York artist Jeff Way. A veteran of the Downtown art scene of the 1960s, 70s and 80’s, Way is widely known for his mask-based performance works which were featured at various venues including the Whitney Museum, the New Museum, Artists Space and the Neuberger Museum. The paintings in this exhibition—all made between 2005–2016—bring the mask as a motif into his painted works and combine with them abstracted grid elements that reference in part back to his earlier chalk-line paintings of the 1970s.

The compositions, which are dynamic and disorienting, demonstrate Way’s mastery of color as a tool to form a strong visual and psychological impact. Distorted faces bend their way through the paintings in a way that feels like a journey through one’s psyche, or perhaps of having entered into dream-world dance.

To create these works, Way utilized a technique he developed in the early 1970s of using a Xerox machine to act as a camera. A gridded mask is placed on the machine’s glass plate along with a fabric—also with a gridded structure—and both are moved during the scanning. This allows for abstractions and distortions to develop in the image. These resulting black and white images form the preliminary “drawings” from which the paintings are based. The fabric transforms into a billowy and folded drapery, contouring and cradling the distorted faces and accentuating the sense movement in the paintings.

The grid, something which normally provides a sense of structure and stability, becomes completely destabilized in the paintings. This is further amplified by Way’s choice of color as a psychological element to intensify the emotional impact of each work.

“Faces, or heads, in my personal iconography, are the source and center of psychological expression.” Way states, “My intention in these paintings … is to create a feeling of displacement, while attempting to retain that essential, latent tension between a sense of spontaneity and control.”

Way has been featured in numerous publications including the New York Times, Artforum, Art in America, and The New Yorker. Way’s work is held in various collections including the Whitney Museum, Philadelphia Museum of Art, and the Denver Museum of Art. He has been a professor since 1968 and has always considered teaching to be an extension of his artistic practice. Since 1985, Way has served on the faculty at the Fashion Institute of Technology, New York. He currently lives and works in New York, NY.