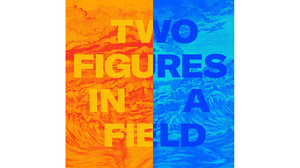 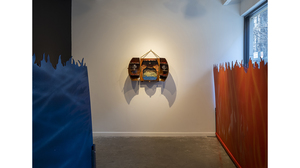 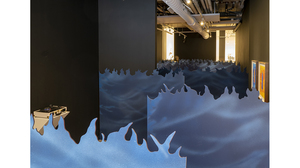 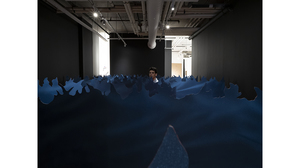 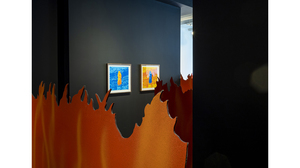 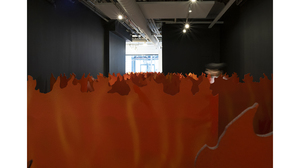 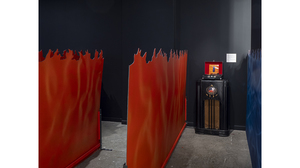 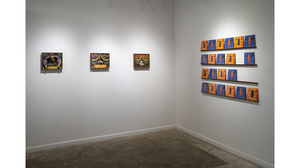 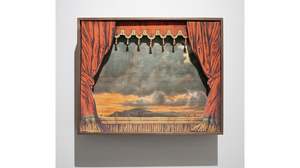 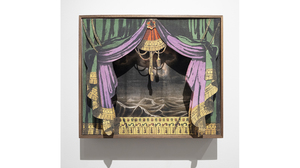 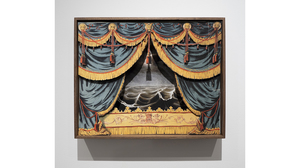 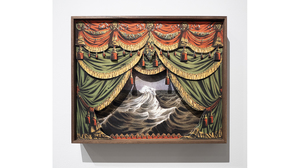 Lesley Heller is pleased to present Two Figures in a Field, an experiential installation by the New York based, Israeli-born artist Tom Pnini. In this exhibition, Pnini—known predominantly for his films—has constructed an interactive installation comprised of two main elements The Set and The Vinyl Album, where the audience becomes an active participant.

The installation presents like a theatre stage, one that comes to life only when the viewer interacts with it.  Pnini’s use of theatrical motifs enables him to act as puppeteer placing gallery visitors where they can be mesmerized by the illusion created by the work, while still being fully aware of its deception.

Entering the space, viewers engage with the set, comprised of 12 rows of shoulder-height partitions forming a series of maze-like corridors in the gallery. Advancing through the space, visitors begin to experience the installation. The partitions form a vast seascape rendered in blues and cutout wave shapes. The wave side of the installation is a tribute to sea travel—and to the myriad of reasons travelers have made journeys for millennia. It is a voyage as a tale; one of fame, romance, escape, and the unknown promises of a new land.

The vinyl album is a limited edition pressing conceived of, and produced by Pnini, featuring musician Hannah Lee Thompson performing songs dating from the 1800s which relate to the themes of water and fire. A record player is waiting in the space for visitors to play the two songs—Haul Away Joe, a sea shanty which tells the story of life-long adventure of a sea traveler, and The Two Orphans Waltz which references the Brooklyn Theatre fire on December 5, 1876 where 300 people were trampled to death trying to escape a fire that started during a performance. Both songs will also be performed live by Hannah Lee Thompson several times during the show.

Miniature theaters—creating a play within a play—are seen throughout the installation. An antique wooden radio holds within it a miniature set of the Brooklyn Theatre at the moment the tragic fire broke out. An old liquor cabinet installed in the gallery has also been transformed into an empty theatre showing only the set where a story of sea travel will unfold.

When visitors exit the space, the reverse side of the wave partitions form a landscape of fire. Rendered in rich yellows and oranges, the back of each wave cutout becomes a flame.

As visitors complete the journey from one side of the gallery to the other, they act as the absent protagonists of the two stories of the installation. With this double-feature of installation and performance—fire and water, two stories, two songs—activated by music and the participants, Two Figures in a Field becomes a story of the forgotten, met at the moment when the drama has ended and the curtain is just about to drop.